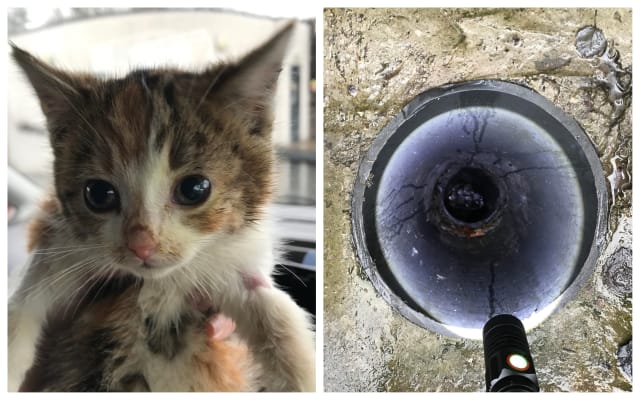 A “miracle” kitten feared dead after falling down a six-foot pipe has been rescued and is now on the road to recovery.

The six-week-old cat, now fittingly renamed Piper, was discovered trapped with another kitten by a passing member of the public on an industrial estate in Stafford, West Midlands.

While the passer-by was able to retrieve the first kitten, it was assumed the second was dead as she was making no sound and appeared not to be moving.

However, when the RSPCA arrived they discovered the second, tri-coloured kitten showing signs of life.

RSPCA inspector Caren Goodman-James said: “We were sure the kitten was dead as she hadn’t moved at all whilst the member of the public reached the other kitten, but then when I used my grasper to bring her out of the pipe, she finally made a sound and moved.

“I couldn’t believe the poor thing was still alive as she looked in a really poor state.”

Ms Goodman-James then wrapped Piper in a towel and took her to Shires Veterinary Practice in Stone, where vets still believed she may not survive.

“She was dehydrated and almost lifeless, with agonal breaths and no reflex. The vets said her heartbeat was also so weak, they didn’t think she would make it,” said Ms Goodman-James.

The rescuer said she “shed a tear” at the prospect, only to be told the following day that staff had worked around the clock to save her.

She added: “This little kitten was literally fighting for her life and after around 90 minutes had started to improve.

“She has continued to make great improvements over the following days.

“She still needs treatment for an eye condition but the vet is very hopeful for a happy and healthy life ahead.”

Boris Johnson will not be caught napping in Downing Street, say aides