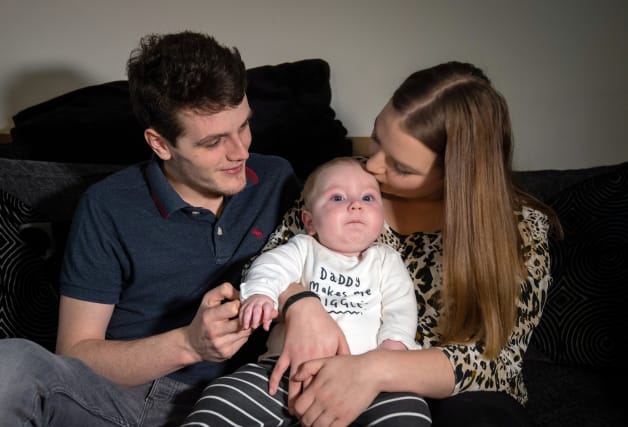 An award-winning photographer is embarking on a “crazy” winter mountain challenge to help give a seriously ill baby an extra chance of life through the “most expensive drug in the world”.

Rosie-Mae Walton, 19, and Wes Powell, 22, are facing their first Christmas with seven-month-old Marley not knowing how long he will live due to the rare genetic disorder he was diagnosed with two months ago.

Marley has Type 1 Spinal Muscular Atrophy (SMA) – a condition similar to motor neurone disease (MND) which makes his muscles extremely weak, stops him moving his arms and legs, and causes breathing and numerous other life-limiting difficulties.

Ms Walton and Mr Powell said he has very poor prognosis as 95% of babies with SMA do not live past 18 months without effective treatment.

He is currently receiving the relatively new Nusinersen treatment, also called Spinraza, which finishes in six months’ time and there are no more UK treatment options if Marley has not improved by then.

So, they are putting their hopes in a treatment available in the United States called Zolgensma, which they believe could dramatically prolong Marley’s life expectancy.

But Zolgensma has been described as the “most expensive drug in the world” with the cost of treatment carrying a massive 2.1 million dollars (£1.6 million) price tag for the one intravenous dose.

After they began their desperate race to raise the funds to pay for the trip and the treatment, news and sport photographer Joe Giddens said he saw Marley’s plight and had to help.

Mr Giddens, who works for PA Media – the national news agency for the UK and Ireland – is heading for England’s highest peak, the 978m (3,209ft) high Scafell Pike, later this month – aiming to climb it as many times as possible in 24 hours while carrying a 50lb (23kg) pack.

Ms Walton said Mr Giddens must be “crazy” as he has chosen just about the shortest day of the year, meaning he will have only eight hours of daylight, as well as the high probability of snow and temperatures of minus 11C at the summit.

Despite this, Mr Giddens has set himself the target of making it up and down nine times, which would be the equivalent of climbing higher than Mount Everest.

Ms Walton, who lives with Marley and Mr Powell in Driffield, East Yorkshire, said: “We can’t put into words how amazing and crazy it is and how thankful we are to him.

“It’s amazing We are so grateful and thankful to Joe. Risking his life for Marley is just amazing and wonderful.”

Ms Walton explained that she did not pick up any problems with Marley when he was born in May.

But, after a few months, the family began to notice certain signs, such as him not being able to lift his head or reach to his mouth.

He was rushed to Hull Royal Infirmary by ambulance when his health visitor realised there was something very wrong and, after he was transferred to hospital in Leeds, Marley was diagnosed with SMA on October 12.

His current treatment involves a series of injections into his spine and his parents say they have seen some progress but the chances of it extending his life expectancy are still low.

They say the gene therapy drug Zolgensma, or AVXS-101, has had an impressive success rate.

Ms Walton, who used to work as a carer, said: “It’s heart-breaking that we’ve got to go through that – the world most expensive drug just to try to keep our baby boy alive.”

She said: “We hope to God we can get him to America and get him the life expectancy he deserves.”

She said that they have both had to give up work to look after Marley, who needs constant care including suction, chest therapy and exercising his weak muscles.

Ms Walton said: “He’s amazing. He’s such a happy baby. He smiles all the time. He’s so content.”

“When he got diagnosed it was like the world crashing down on us. It was horrible.”

She said: “When you don’t know how long you’ve got with your baby, it’s heartbreaking.”

Ms Walton said: “We’re so very grateful to every single person, from the messages through to everything – everybody’s support, kindness and words and everything they’ve done to support my family.”

Mr Giddens, 33, from Leicester, has done a series of challenges over the years as personal achievements and thought it was time he did one to raise some money for a worthwhile cause.

He said: “I thought that to get any kind of notice it needs to be something slightly crazy, slightly mad.”

He said: “When it gets dark out there in the early hours of the morning, my body’s tired, things are hurting and no-ones around, the more money we can raise for Marley will hopefully spur me on.”

Ms Walton and Mr Powell have said that if they do not reach their target, or the drug becomes available on the NHS, all the money donated will go to fund Marley’s ongoing care, including specialist equipment.

Details of the challenge, Marley and how to donate can be found at justgiving.com/crowdfunding/marleysmountainmission.