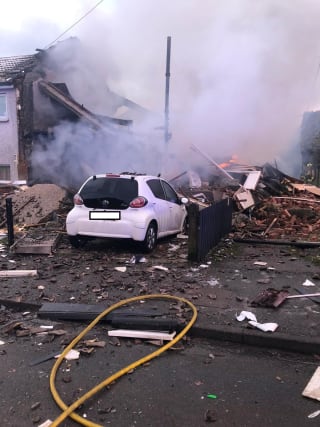 Three people have been taken to hospital after an explosion at a house in West Yorkshire, the fire service has said.

The incident happened shortly after 7.30am on Saturday in Green Lane in the Illingworth area of Halifax.

West Yorkshire Fire and Rescue Service said three people were treated and taken to hospital, and all others have been accounted for.

The service said the explosion affected one building and six surrounding houses were evacuated as a safety precaution.

Investigations are ongoing into the cause of the explosion and crews are managing any "remaining pockets of fire" at the scene.

A picture shared by the service showed smoking rubble where the property had once been.

The fire service said crews are likely to be on the scene for some time.

They also said crews have been working with police and ambulance services as well as the local authority and utility companies.

Many in the area posted on social media, reporting an extremely loud bang.

One wrote: "Never head such BANG it shook the promenade at Ogden."

Fire engines from Fairweather Green, Halifax and Odsal initially attended and were joined by specialist units from Cleckheaton and Dewsbury.

A fundraiser for those affected by the blast was set up on Saturday morning, with people offering to donate clothes and food to the family through local businesses and charities.