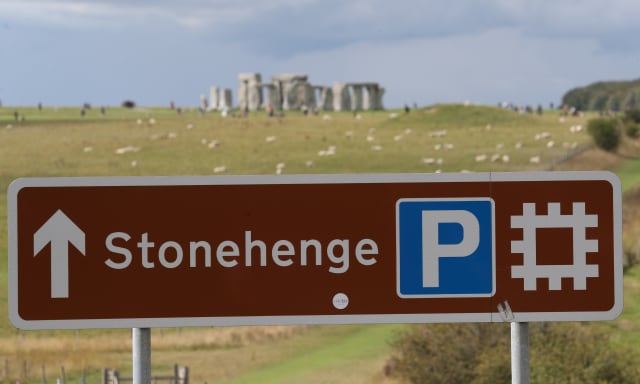 Protesters have said they are taking part in a "mass trespass" at Stonehenge against the Government's £27 billion roads programme and plans to dig a tunnel near the prehistoric monument.

The group, who described themselves as an alliance of local residents, ecologists, activists, archaeologists and pagans, gathered at the Wiltshire site at about noon on Saturday.

They are protesting against the Government's planned £27.4 billion investment in the strategic road network across the country, as well as a controversial £1.7 billion plan to dig a road tunnel near Stonehenge.

Transport Secretary Grant Shapps gave the go-ahead to the scheme in November, against the recommendations of planning officials, who warned it will case harm to the World Heritage Site.

Protesters said they also gathered in support of Save Stonehenge World Heritage Site, which has launched a legal challenge to Mr Shapps' decision.

English Heritage closed the site to the public for the rest of the day after the arrival of the protesters.

Environmental activist Dan Hooper, known as Swampy, said: "This is the coming together of people who are saying we have had enough.

"The Stonehenge tunnel is just one scheme in a £27 billion roads programme.

"As road transport is the single largest source of carbon emissions in the UK, this is insane."

"The Government is ignoring the uncomfortable but very real truth that time is running short. Now is a critical time to rethink our connection with nature.

"We need to put a stop to these road schemes as we did before."

The tunnel is part of a £1.7 billion investment in the A303 between Amesbury and Berwick Down.

The A303, which is a popular route for motorists travelling to and from the South West, is often severely congested on the single carriageway stretch near the stones in Wiltshire.

Highways England said its plan for a two-mile tunnel will remove the sight and sound of traffic passing the site, and cut journey times.

But some environmentalists and archaeologists have voiced their opposition to the plan due to its potential impact on the area.

The project is classified as nationally significant, which means a Development Consent Order is needed for it to go ahead.

Simon Bramwell, a pagan, described the site as "hallowed ground" and said the cost of the scheme would "be better spent elsewhere".

"We are here today to reclaim our heritage," Mr Bramwell said.

"Stonehenge has stood for 5,000 years as a testament to the strength, belief and commitment of our people to this land of ours.

"After the sacrifices of the First World War, it was gifted to the British public and we are here today to take it back."

A spokeswoman for English Heritage said Stonehenge was closed early to the public on Saturday due to the protest but is expected to reopen "as normal" on Sunday.

"It is an offence under the Ancient Monuments Act (1979) for people to enter the monument area without English Heritage's permission," she said.

"Whilst we respect people's right to demonstrate peacefully, we do not condone behaviour that disrupts and endangers the site and the people who visit or work here."