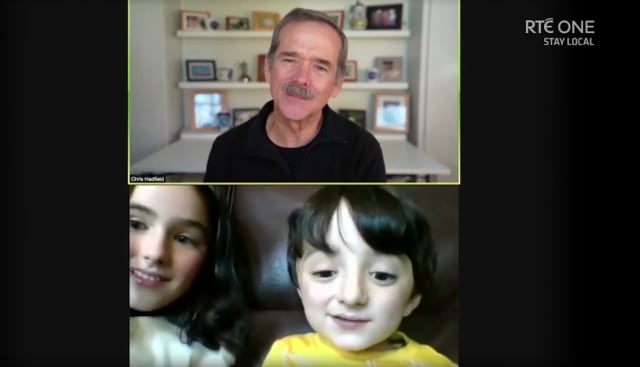 A six-year-old space enthusiast who warmed Irish hearts with his appearance on national television got a Christmas gift of his own when retired astronaut Chris Hadfield surprised him over video call.

Adam King, from Cork, who has brittle bones, was the star of broadcaster RTE’s Christmas-themed Late Late Toy Show last week, delighting audiences with his dreams of becoming capcom – the flight communicator from the ground – for Nasa.

The charming appearance caught the attention of Mr Hadfield, who was the space agency’s chief capcom for 25 space missions and has also travelled into space three times himself.

The astronaut sent a personal message telling Adam he was “so impressed” by the youngster, who reminded him of himself when he was a child.

Things got even better for Adam when his hero joined him for a surprise video call on Friday night’s Late Late Show.

During the chat, the youngster told Mr Hadfield his own space adventures with his brothers and sisters meant “sometimes I go to the moon and sometimes I go to some other places like different planets”.

The astronaut replied: “I have two brothers and two sisters and when I was your age we did exactly the same thing.

“And the cool thing, Adam, is when I got older I got a chance to actually fly in space, three times. It’s amazing what can happen in life.”

Asked by Adam if he was afraid on his first space mission, Mr Hadfield assured him: “Even though it was a dangerous thing, because I knew what I was doing and I had studied and practised, I wasn’t afraid. I was ready.

“I’d much rather be ready than afraid, and you’ve got your whole life to get ready.”