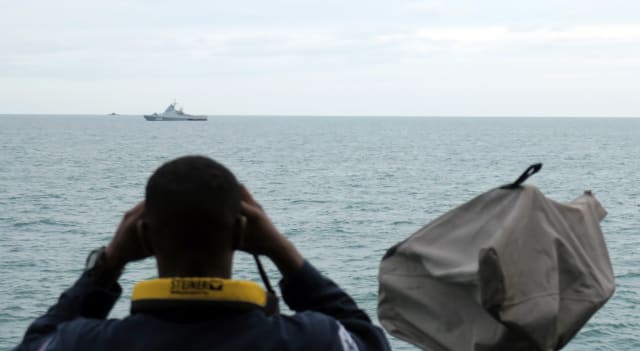 Nine Russian warships have been monitored by the Royal Navy as they sailed in waters around the UK in the past two weeks.

The ships have included a surfaced submarine, a destroyer, a corvette and a patrol ship along with their supporting tugs and supply ships travelling in the English Channel, Celtic Sea and the west coast of Scotland.

First Sea Lord Admiral Tony Radakin said: "This is why the Royal Navy is at sea every day, protecting the UK and our interests.

"Even with the pressures of Covid, we remain at short notice to respond to threats both in home waters and around the world.

"Despite the increase in Russian activity, both on the surface and underwater, we are always ready to respond."

Type 23 frigate HMS Northumberland, based at Devonport, watched the movements of Udaloy-class destroyer the Vice-Admiral Kulakov as it sailed north-west of the Outer Hebrides, off the west coast of Scotland.

Patrol ship HMS Severn was on duty in the English Channel and Dover Strait, where it shadowed a surfaced Kilo-class submarine, the Stary Oskol, the corvette Boikiy, patrol ship Vasiliy Bykov and support ships.

Severn was also on patrol as the Vice-Admiral Kulakov sailed through the Channel.

Seems we're in the news a lot this week! https://t.co/7fJWik0z4k

For some of the operation, the Russian ships sheltered from bad weather within the Baie de Seine, northern France, where Severn was joined by allied French navy ships and aircraft.

HMS Tyne, HMS Richmond and HMS Kent jointly escorted the same group of Russian ships as they operated in the Celtic Sea.

The task group were joined by RAF Typhoon and F-35s jets, plus tankers RFA Tideforce and RFA Tiderace.