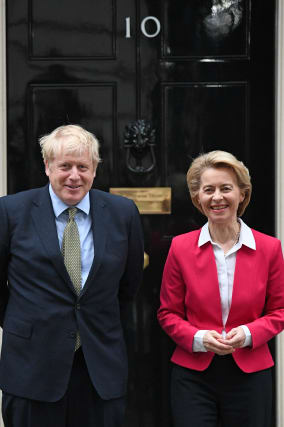 Britain and the EU are to make a final push to get a post-Brexit trade deal over the line following crisis talks between Boris Johnson and European Commission president Ursula von der Leyen.

In an hour-long phone call, the two leaders agreed to instruct their negotiating teams to resume talks on Sunday in a last attempt to see if they can resolve the remaining differences.

With time rapidly running out before the Brexit transition period ends at the end of the month, British sources warned that the process may still conclude without an agreement.

“This is the final throw of the dice,” said one source close to the negotiations.

“There is a fair deal to be done that works for both sides, but this will only happen if the EU is willing to respect the fundamental principles of sovereignty and control.”

In a joint statement following their call, Mr Johnson and Ms von der Leyen acknowledged “significant differences” remained on the key issues of fishing rights, competition rules and the governance arrangements for any deal.

“Both sides underlined that no agreement is feasible if these issues are not resolved,” they said.

“Whilst recognising the seriousness of these differences, we agreed that a further effort should be undertaken by our negotiating teams to assess whether they can be resolved.

“We are therefore instructing our chief negotiators to reconvene tomorrow in Brussels. We will speak again on Monday evening.”

The call took place after Mr Barnier and Lord Frost announced on Friday that they were putting the talks on “pause” after the latest round of negotiations failed to achieve breakthrough.

Lord Frost will now travel back to Brussels on Sunday with a small team of negotiators to attempt to work through the remaining issues.

While in the past much of the focus has been on the differences over fisheries, British sources indicated they would be looking particularly at the so-called “level playing field” rules on issues like state aid for business.

While the two sides have been circling round the key issues for months, it was is unclear from the statement whether either – or both – of the two leaders had been prepared to shift ground in a way that would enable them to bridge the gaps.

On the UK side there was continuing anger at what were being described as the EU’s “unprecedented and last-minute demands” which, it was said, would have tied Britain to EU regulations “in perpetuity”.

There were accusations that the EU was pursuing an “unrealistic” negotiating mandate and that the talks had got as far as they could without high level political intervention.

Irish premier Micheal Martin, whose country is among those most anxious to get an agreement, welcomed the announcement that the negotiations would resume.

“An agreement is in everyone’s best interests. Every effort should be made to reach a deal,” he tweeted.

For Labour, shadow cabinet office minister Rachel Reeves called on both sides to resolve their differences as swiftly as possible.

“The British people were promised a deal and, with time running out, we urge both sides to get on with reaching an agreement,” she said.

However, Brexit Party leader Nigel Farage expressed concern that they were moving towards yet another extension of Britain’s period under EU rules.

“I do hope that this lack of an agreement does not mean we are heading for an extension,” he tweeted.

“After four and a half years, Brexit voters won’t tolerate that.”

If there is no agreement, the UK will leave the European single market and customs union on December 31 and begin trading with the bloc on World Trade Organisation terms, with the imposition of tariffs and quotas.

EU leaders are due to meet on Thursday for a two-day summit in Brussels – their last scheduled gathering of the year – when they could sign-off on any agreement.

Time then has to be found for both Houses of Parliament in the UK and the European parliament to ratify it before the transition period expires – although there have been suggestions that could slip in the EU side.

In a further complicating factor, the UK Government is bringing back to the Commons legislation enabling it to override elements of Mr Johnson’s “divorce” settlement with Brussels in breach of international law.

On Monday, MPs will vote on whether to overturn amendments by the House of Lords which removed the provisions in the UK Internal Market Bill relating to the Irish border.

MPs will then go on later in the week to debate the Taxation (Post-Transition Period) Bill which contains further similar provisions.

The legislation has infuriated the EU and – if it is passed – could further sour the mood in the negotiations making a deal harder to reach.