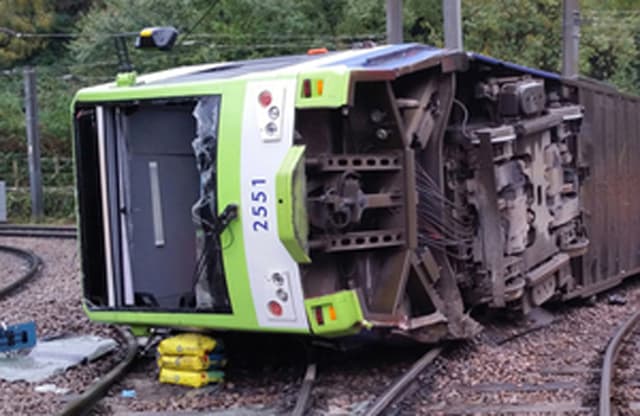 Families of the Croydon tram crash victims are demanding that the inquest into the accident is moved to central London after a fresh delay.

It is more than four years since the derailment on November 9 2016 which killed seven people and left 51 more injured.

The 12-week inquest was initially due to begin in Croydon in October, but has been repeatedly delayed.

It is now not scheduled to start until mid-May next year.

South London senior coroner Sarah Ormond-Walshe previously said the schedule was pushed back due to the coronavirus pandemic, even though inquiries into the Grenfell Tower fire and Manchester Arena bombing, which both happened after the tram crash, have continued.

Danielle Wynne, whose grandfather Philip Logan, 52, died in the crash, believes the effective bankruptcy of Croydon Council is contributing to the delay.

She is one of a number of the victims’ relatives calling on Mark Lucraft QC, chief coroner of England and Wales, to ensure the inquest is fully funded, moved to central London and takes place shortly.

She told the PA news agency: “The coroner is putting (the delay) down to Covid reasons, but is it because the Borough of Croydon is bankrupt?

“Why should we have to wait when other big inquiries are still taking place?

“As families we deserve to get a full and fair inquest.

“I think that we’re only going to get that if it comes out of Croydon and we get central funding for it.”

Ms Wynne said the victims’ families have “many questions” which only an inquest can answer, such as why the tram trackside signage and lighting on the approach to the crash site was not in a better condition.

The tram came off the tracks at almost four times the speed limit in darkness and heavy rain.

Jean Smith, mother of 35-year-old crash victim Mark Smith, said: “We’re all trying to live a life that’s different than what it was, but the inquest is still holding us back in a lot of ways.

“It needs to be dealt with.

“It needs to be gone through.

“I thought this inquest would have taken place about two years ago.”

The 64-year-old expressed concern about the speed of progress under Ms Ormond-Walshe.

“She seems like a really nice competent lady but so far, we’ve got nowhere.

“All we do is go into little meetings,” Ms Smith said.

PA has obtained a letter written by law firms Osbornes Law and Furley Page, who represent the victims’ families, to Judge Lucraft, calling for him to step in.

The letter stated: “Four years have already passed since the event and not only must the memories of key witnesses be fading but the need for the prevention of future deaths is of serious concern to the families, and impacts all travellers on the tram service.”

The lawyers are also frustrated at the time it is taking tram operator Tram Operations Limited, a subsidiary of FirstGroup, to hand over important documents.

A Judicial Office spokesman said: “The location and timing of the inquest would be for the local coroner and not the chief coroner.”