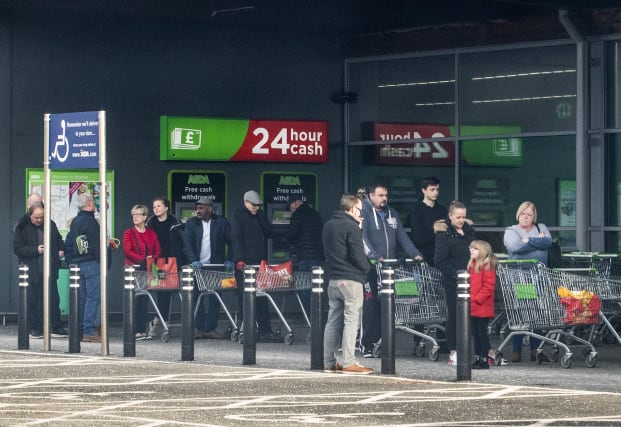 Pressure is piling on remaining supermarkets to “do the ring thing” and hand back cash from the business rates holiday after Tesco, Morrisons, Sainsbury’s and Aldi all committed to return savings, analysts have said.

Asda, Lidl and Waitrose are among essential retailers who have not yet agreed to return millions of pounds from the Government’s business rates break.

On Wednesday morning, Tesco was the first to reveal plans to hand back cash, saying it will return its £585 million rates holiday.

Now, about £1.4 billion in total has been pledged to be returned following similar commitments by Morrisons, Sainsbury’s and Aldi.

Retail analyst Richard Hyman told the PA news agency that essential retailers will now be expected to follow their example.

“I think one has to give a huge well done for Tesco for doing the right thing and sparking this knock-on effect,” he said.

“Now companies who haven’t done the same thing will be pushed into a corner to do the right thing themselves.

“On the other hand, one does have to question why this has taken so long and whether Tesco will benefit from the others following suit.

“B&M is one company whose stance could face criticism in comparison so may have to review this.”

A spokesman for B&M declined to comment when approached on Wednesday.

Fellow analyst Nick Bubb said Sainsbury’s decision to return rates for its supermarket business but not its Argos arm could provide a “possible route” for retailers with a mix of food and non-essential products, such as Marks & Spencer and Waitrose-owner John Lewis Partnership (JLP).

On Wednesday, a spokesman for JLP said: “The outlook remains incredibly uncertain and Government support remains crucial to help us navigate the crisis.”

Data compiled last month for the PA news agency by real estate adviser Altus Group projected the UK’s four largest grocers – Tesco, Sainsbury’s, Asda and Morrisons, plus German rivals Aldi and Lidl – would save about £1.87 billion as a result of the rates holiday.

The total saving for all “essential” retailers, which have been allowed to remain open, is about £3.03 billion, Altus added, from a total rates bill of £10.1 billion.

Michael Hewson, chief market analyst at CMC Markets UK, said the actions of the four grocers should not impact the need for business rates reform.

He said: “While the move is welcome, it doesn’t change the fact that the Government needs to look at a business rates model that is outdated and penalises bricks and mortar retailers in a way that online retailers don’t have to contend with.

“It’s all very well criticising the supermarkets for taking taxpayers’ money, but let’s not forget that the retail sector wouldn’t be in anywhere near as much trouble if it wasn’t for Government procrastination over reforming business rates policy.”

HSBC analyst Andrew Porteous said Tesco’s move may prove to be an “astute strategic move” as its less profitable rivals follow its decision to return savings.

“If done only because Tesco feels it should, it is hard to justify the move to pay business rates of £585 million,” he said.

“However, strategically, it could be smart.

“In moving first, Tesco will get the credit for ‘repaying’ business rates while incurring less cost as rates relief is only around one third of its profits vs competitors at 60-70%.

“Competitors face a choice of either following and incurring the cost, or resisting and weighing the cost of public ‘ire’ with the benefit of holding onto cash.”