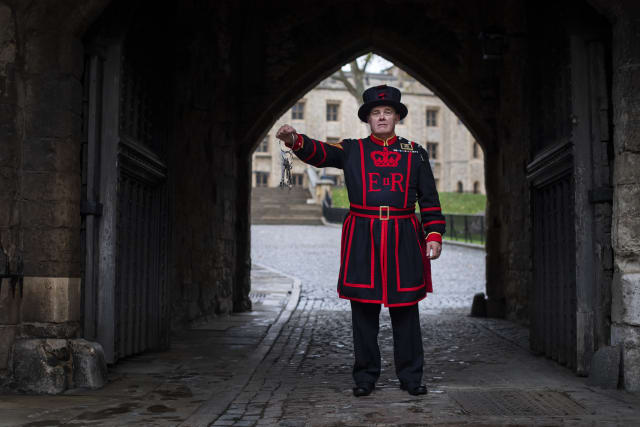 A new yeoman gaoler will welcome visitors to the reopened Tower of London as it lowers its drawbridge to the public after the coronavirus lockdown.

Beefeater Serjeant Rob Fuller will take over the prestigious role of gaoler, who was traditionally in charge of prisoners at the 11th century fortress.

The postholder is the second in command of the Yeoman Body at the tower and is responsible for the 32 other yeoman warders, more commonly known as beefeaters.

The yeoman gaoler still carries the infamous axe during ceremonial duties and is involved in the Ceremony of the Keys, which has taken place every night at the tower for at least 700 years.

Serjeant Fuller will become the first former member of the Royal Navy to hold the position, taking over from Jim Duncan RVM.

To qualify for the role of yeoman warder, applicants must have served at least 22 years in the armed forces, hold the long service and good conduct medal and have reached the level of warrant officer or equivalent.

Serjeant Fuller, who was born in Neasden, north-west London, applied to become a yeoman warder in 2011 after 34 years of duty with the Royal Navy.

After six years as a warder, he was promoted to yeoman serjeant – a role he fulfilled until his recent promotion.

He said: “It was an honour to become a yeoman warder and then a yeoman serjeant – but the yeoman gaoler position tops the lot.

“I feel very privileged to be the first former member of the Royal Navy to hold the position of gaoler and look forward to getting stuck in as we open the doors to visitors once again.”

Yeoman warders at the London landmark will be among those welcoming visitors as it lowers its drawbridge this week.

The attraction reopened its doors to the public on Thursday.

It was forced to close during England’s second national lockdown.