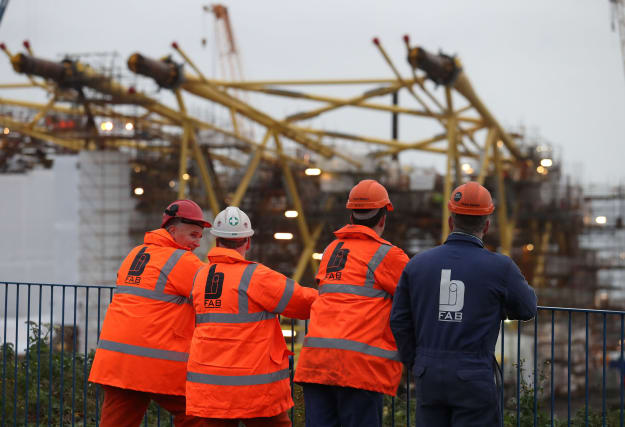 Canada-based DF Barnes bought the business in 2018 but said it was “not an investable company at the time” and it was understood the Scottish Government would be the “primary financiers”.

That was after BiFab, which has yards in Burntisland and Methil in Fife as well as one on Lewis, had to be rescued by the Scottish Government in 2017.

The firm had been preparing to put up to 500 employees back to work on a wind turbine scheme when it emerged ministers could no longer provide the necessary financial support.

A £2 billion deal subsequently collapsed to manufacture eight turbine jackets at its yard in Methil as part of the Neart Na Gaoithe (NnG) project.

A statement from the company said: “BiFab can confirm that the board has agreed to place the company in administration following the Scottish Government’s decision to remove contract assurances.

“The company has worked tirelessly to bring jobs into Fife and Lewis, with some success.

“However the absence of supply chain protections in Scotland and the wider UK have consistently undermined our ability to compete with government-owned and government-supported yards outside and inside the European Union.

“We would urge the Scottish and UK governments to address these structural challenges as a matter of urgency in order to ensure that the benefits of offshore renewables are shared more widely with communities across the country.”

The Scottish Government has argued state aid rules prevent it from bailing out the company.

Economy Secretary Fiona Hyslop told MSPs on Wednesday that ministers had ruled out nationalising the struggling firm and they “can no longer lawfully support the company financially”.

Trade union secretaries Gary Smith and Pat Rafferty, from GMB Scotland and Unite Scotland respectively, said: “BiFab’s administration exposes the myth of Scotland’s renewables revolution, as well as a decade of political hypocrisy and failure in Scotland and the rest of the UK.

“The workers and communities dependent on these yards have fought so hard for a future and everyone was hoping that 2021 would finally be the turning point.

“Shamefully the Scottish Government has buried these hopes just in time for Christmas and they have worked together with UK Government in doing so.”

STUC general secretary Roz Foyer added: “Today’s announcement is the latest stage in a sorry saga of government and corporate failure with the victims being workers and their families from Fife to the islands.

“These failures began over a decade ago with false promises of Scotland becoming ‘the Saudi Arabia of renewables’ without an investment and industrial strategy to match.”