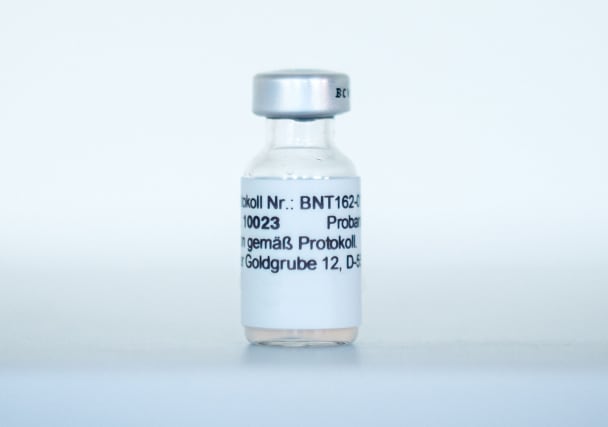 Vaccination against Covid-19 will begin early next week after the UK became the first country in the world to approve a jab from Pfizer and BioNTech.

It is still unclear who will be the very first to receive the new jab, despite the Joint Committee on Vaccination and Immunisation (JCVI), which advises ministers, saying care home residents and staff should be prioritised.

The vaccine has been shown in studies to be 95% effective and works in all age groups.

The JCVI said the elderly are most at risk and should come first, followed by those aged 80 and above and frontline health workers, then younger age groups and the clinically vulnerable.

However, the jabs are being delivered to NHS hospital hubs with reports suggesting NHS staff could get them first.

Health Secretary Matt Hancock told MPs that delivery of the vaccine would be according to “clinical prioritisation and operational necessity because of the need to hold the vaccine at -70C, it makes this vaccine particularly challenging to deploy.”

Pfizer and BioNTech have said the jab can be sent to care homes, as long as the vaccine travels for no more than six hours after it leaves cold storage and is then put in a normal fridge at 2C to 8C.

Ben Osborn, Pfizer’s UK country manager, told reporters: “The point I really want to emphasise is, at the point of administration and deployment by the NHS, our vaccine can be stored under normal refrigerated temperatures at 2-8C for five days.

“And that gives us the flexibility to reach the target populations identified this morning by the JCVI over the months ahead.”

Prime Minister Boris Johnson welcomed the approval of the jab by the Medicines and Healthcare products Regulatory Agency (MHRA) and said Covid-19 vaccines will allow Britons to “reclaim our lives”.

However, he said there were “logistical challenges to be overcome to get vulnerable people the access to the vaccine that they need”.

The UK has ordered 40 million doses of the Pfizer vaccine, enough to vaccinate 20 million people with two doses, given 21 days apart.

Health Secretary Matt Hancock said 800,000 doses of the jab will arrive next week, with millions more arriving in the coming weeks.

BioNTech’s Sean Marett said the UK was likely to receive at least five million doses of vaccine by the end of year.

The UK had initially expected 10 million by the end of December, but Mr Marett said the amount being shipped out was being scaled back for all orders.

“The 10 million doses were assuming a 100 million production of doses this year,” he told BBC Radio 4’s World At One programme.

“There are approximately up to 50 million doses that we will be producing this year and so I think it is reasonable to assume that there will be a scaling back of that 10 million for December, just like for every other country.”

In Wales, health and social care minister Vaughan Gething told a session of the Senedd’s plenary that the roll-out of the Pfizer vaccine to care homes in Wales presented logistical challenges.

“It means care home residents, who are right at the top of the vulnerability list, that we are not going to be able to deliver the vaccine to them,” Mr Gething said.

“They will get some protection with our ability to prioritise staff who work in those environments.

“I’m still optimistic this vaccine will make a real difference but the Oxford vaccine gives us a much greater ability to take it out to people because it is a vaccine that can essentially be stored in a fridge, so there are significantly less logistical challenges to deliver.”

Mr Gething said that it was not possible to transport the Pfizer vaccine to more than 1,000 care homes across Wales.

“We can’t be clear that it will still be effective for use in each of those homes and it is not something you can transfer in very small quantities,” he said.

A Department of Health and Social Care spokesman said the MHRA had approved the jab after “months of rigorous clinical trials and a thorough analysis of the data by experts” from the regulator.

He said they have concluded that the vaccine has “met its strict standards of safety, quality and effectiveness”.

Mr Hancock told Sky News the UK was the first country in the world to have a “clinically authorised vaccine” and it would be deployed as “quickly as it is manufactured”.

He added: “The MHRA, the fiercely independent regulator, has clinically authorised the vaccine for roll out.

“The NHS stands ready to make that happen.”

Mr Hancock said, until vaccines were rolled out, people needed to stick to the rules, saying: “We’ve got to get from here to there and we’ve got to keep people safe in the meantime.”

There would be “three modes of delivery” of the vaccine, with hospitals, mass vaccination centres and GPs and pharmacists offering the jab to those most in need, he added.

“Fifty hospitals across the country are already set up and waiting to receive the vaccine as soon as it’s approved, so that can now happen.”

Mr Hancock confirmed vaccinations will start with priority groups, although it is unclear if he means care home residents will be vaccinated above all others.

He told BBC Breakfast: “2020 has been just awful and 2021 is going to be better, and help is on its way with this vaccine.

“I’m confident now with the news today that from spring, from Easter onwards, things are going to be better and we’re going to have a summer next year that everybody can enjoy.”

In a Downing Street briefing, Professor Wei Shen Lim from the JCVI explained how care home residents were vulnerable to Covid-19, hence why they are top of the list.

But he added: “The JCVI’s advice is that every effort should be made to supply vaccines and offer vaccinations to care home residents, whether or not that is actually doable is dependent on deployment and implementation.”

Dr June Raine, head of the MHRA, said “no corners have been cut” in assessing the jab’s safety.

“The safety of the public will always come first,” she said,

“This recommendation has only been given by the MHRA following the most rigorous scientific assessment of every piece of data so that it meets the required strict standards of safety, of effectiveness and of quality.”

Information obtained by the PA news agency on the jab’s roll-out says, once the vaccine arrives in the UK from Pfizer’s plant in Belgium, batches will be checked at a central depot to ensure their quality.

The vaccine will then be unloaded and moved to storage freezers where it will undergo an additional temperature check.

Public Health England (PHE) will process orders placed by the NHS for next day delivery to hospital hubs around the UK.