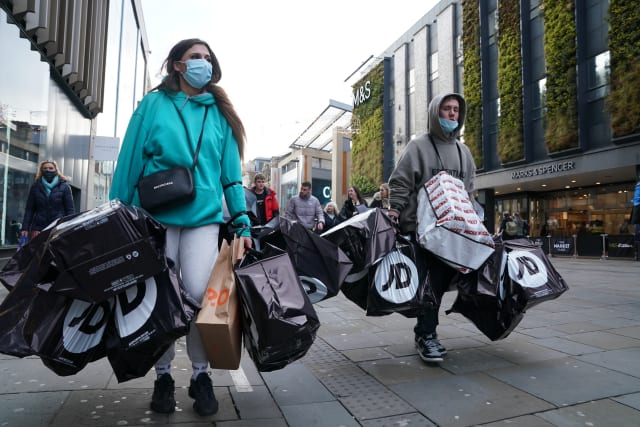 Early birds hit the stores to avoid the queues as non-essential shops in England reopened after the four-week lockdown.

Droves of customers queued early outside stores in London’s Oxford Street on what has been dubbed “Wild Wednesday”.

Jordan Roberts, 19, was among a dozen people queuing outside Selfridges at the popular shopping destination before the flagship department store opened its doors on a frosty Wednesday morning.

They were welcomed by store workers dressed as glittery elves on roller skates and encouraged to walk through one-way systems on every floor, one of the measures shops have implemented to comply with Government guidelines on social distancing.

Miss Roberts said she was doing her Christmas shopping, adding: “It feels more enjoyable being in a store and things run out of stock online.”

On England coming out of lockdown, she said: “It’s good to have our freedom back.”

The majority of England is under Tier 2 and 3 of the new Covid-19 restrictions which limits social contact between households but allows non-essential stores to reopen.

London shopper Tamara Rass, 44, said she hit the stores early as she anticipated the shops to get busy.

She said: “For me, it’s a little bit of light at the end of the tunnel and getting back to normality.

“There are things in store that I can’t get online and I like to treat my daughter once a month.”

Business leaders hope the British high street will be given a boost in the final weeks coming up to Christmas, as retailers battle to recover from crippling restrictions during the pandemic.

It comes after nearly 25,000 staff at Sir Philip Green’s Arcadia Group hang in the balance, with fashion chain Bonmarche the latest retailer to collapse into administration for the second time in just over a year.

Selfridges’ stores director Maeve Wall said she was saddened to hear the news of potential job losses and described the festive season as a crucial time of the year for retailers.

Speaking to the PA news agency, she said: “It’s never a good time when you hear other department stores and brands on the high street closing.

“It’s definitely a sad period of time and particularly to hear so many potential job losses.

“Retail this year along with hospitality, it’s been really challenging and Christmas is such a big part of the retail calendar.

“The next couple of weeks we have ahead of us, hopefully the measures put in place across the country people will come out and feel safe.”