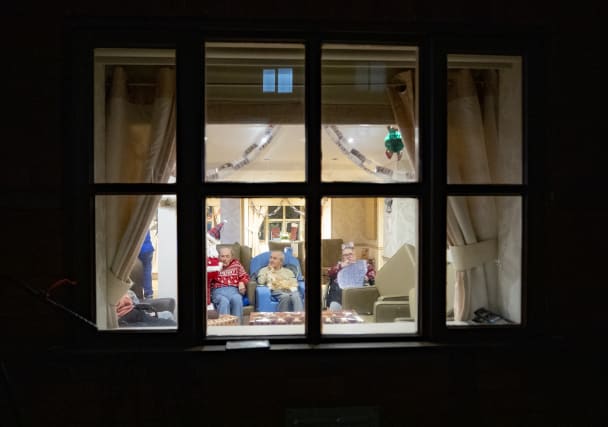 Elderly people in care homes and their carers are top of the list to receive a Covid-19 vaccine after the UK became the first country in the world to approve a jab from Pfizer and BioNTech.

The jab has been shown in studies to be 95% effective and works in all age groups.

The Joint Committee on Vaccination and Immunisation (JCVI), which advises ministers, said vaccines should first be offered to elderly people in care homes and care home workers.

Next on the priority list are those aged 80 and above and frontline health workers.

All those aged 75 and over should be vaccinated next, followed by those 70 and over and clinically “extremely vulnerable” individuals, it said.

People aged 65 and over are next in line, alongside anyone aged 16 to 64 who has underlying health conditions which put them at a “higher risk of serious disease and mortality”.

No decisions have yet been made on priorities for under-50s.

The UK has ordered 40 million doses of the Pfizer vaccine, enough to vaccinate 20 million people with two doses, given 21 days apart.

Health Secretary Matt Hancock said 800,000 doses of the jab will arrive next week.

He said millions more doses were due in the coming weeks.

Studies on the vaccine show it has to be stored at minus 70C but is also stable at 2C to 8C for a short time, meaning it could possibly be sent to different locations.

But it is thought operational reasons may prevent care home residents getting the jab first. The Department of Health has been contacted for comment.

Prime Minister Boris Johnson said the announcement was “fantastic” news, tweeting: “It’s the protection of vaccines that will ultimately allow us to reclaim our lives and get the economy moving again.”

A Department of Health and Social Care spokesman said the Medicines and Healthcare products Regulatory Agency (MHRA) had approved the jab after “months of rigorous clinical trials and a thorough analysis of the data by experts” from the regulator.

He said they have concluded that the vaccine has “met its strict standards of safety, quality and effectiveness”.

Mr Hancock told Sky News the UK was the first country in the world to have a “clinically authorised vaccine” and it would be deployed as “quickly as it is manufactured”.

He added: “This is fantastic news.

“The MHRA, the fiercely independent regulator, has clinically authorised the vaccine for roll out.

“The NHS stands ready to make that happen.

“So, from early next week we will start the programme of vaccinating people against Covid-19 here in this country.”

Mr Hancock said that losing his step-grandfather to Covid-19 has “made him more determined” to tackle coronavirus.

He said: “I have a big and complicated and loving family, and losing a member of your family is obviously a big thing for anybody.”

Mr Hancock said until vaccines were rolled out people needed to stick to the rules, saying: “We’ve got to get from here to there and we’ve got to keep people safe in the meantime.”

There would be “three modes of delivery” of the vaccine, with hospitals, mass vaccination centres and GPs and pharmacists offering the jab to those most in need, he added.

“Fifty hospitals across the country are already set up and waiting to receive the vaccine as soon as it’s approved, so that can now happen.”

Mr Hancock confirmed vaccinations will start with the most elderly, people in care homes and their carers, with NHS staff and the clinically extremely vulnerable also high on the list.

He told BBC Breakfast: “2020 has been just awful and 2021 is going to be better, and help is on its way with this vaccine.

“I’m confident now with the news today that from spring, from Easter onwards, things are going to be better and we’re going to have a summer next year that everybody can enjoy.”

He tweeted: “It will take until spring until the vulnerable population who wish to are fully vaccinated. We can’t lower our guard yet.”

Information obtained by the PA news agency on the jab’s roll-out says once the vaccine arrives in the UK from Pfizer’s plant in Belgium, batches will be checked at a central depot to ensure their quality.

The vaccine will then be unloaded and moved to storage freezers where it will undergo an additional temperature check.

Public Health England (PHE) will process orders placed by the NHS for next day delivery to hospital hubs around the UK.

Dr June Raine, head of the regulator which approved the Pfizer and BioNTech vaccine, said “no corners have been cut” in assessing its safety.

The MHRA chief told a Downing Street briefing: “The safety of the public will always come first.

“This recommendation has only been given by the MHRA following the most rigorous scientific assessment of every piece of data so that it meets the required strict standards of safety, of effectiveness and of quality.”

She said experts had studied more than 1,000 pages of data on the vaccines, reviewed storage and the information for prescribing.

Business Secretary Alok Sharma tweeted: “The UK was the first country to sign a deal with Pfizer/BioNTech, now we will be the first to deploy their vaccine.

“To everyone involved in this breakthrough: thank you.

“In years to come, we will remember this moment as the day the UK led humanity’s charge against this disease.”

Scotland’s First Minister Nicola Sturgeon said it was “the best news in a long time”.

She tweeted: “@scotgov ready to start vaccinations as soon as supplies arrive.”

Sir Simon Stevens, chief executive of the NHS in England, said the vaccination programme would be the “largest scale vaccination campaign in our country’s history”.

Sunak under fire after thanking mums for ‘juggling childcare and work’