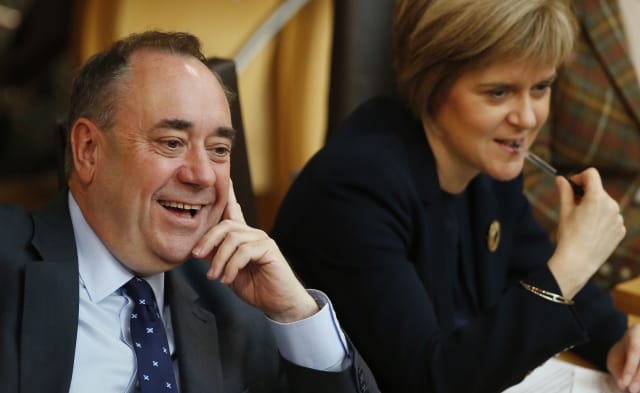 Nicola Sturgeon’s closest civil servant said he had not told the First Minister that a woman confided in him about allegations of sexual harassment by Alex Salmond.

The First Minister’s principal private secretary (PPS) John Somers told MPSs the woman only gave him permission to inform his line manager and he “definitively and categorically” did not tell anyone else.

Mr Somers said he felt “overwhelmed” at the woman’s disclosure and upheld his commitment to her to keep the details of their conversation secret, other than to tell his line manager Barabara Allison — the government’s communications director — as agreed.

Giving evidence to the Holyrood inquiry into the government’s botched handling of complaints, Mr Somers said: “I wouldn’t tell the First Minister because it wasn’t my experience to share.

“That was my first priority.

“Secondly, had I done that, I would have put the First Minister in a state of knowledge about something she couldn’t have taken action upon at that point.”

The woman, who is known as Miss A, had potentially been seeking to tell Ms Sturgeon about her experiences and arranged a “personal” meeting with Mr Somers on November 20, 2017.

Mr Somers said: “In the course of that disclosure, Miss A had said to me that there had been experiences in the past that she wanted to share and she wanted to share in a way that would improve the organisation and make sure that no one else would have to go through that experience again.

“She was not making a complaint, but she wanted to assess her options for how she could best share that.

“One of those options would be potentially speaking to the First Minister about her experience and so that’s why I assume she came to me.”

He continued: “I came back to her the following day and we agreed that she would speak my line manager directly, which is Barbara Allison.

“At the end of the second meeting, I said that if she said she felt she was not being taken seriously and no one was listening to her, she should come back to speak me and if she wanted to speak with the First Minister then I would set that up.”

“After that second meeting, I never heard from her again,” he added.

Mr Somers told MSPs he did not think to tell anyone in the SNP about the claims and said: “It did not occur to me, my priority was on protecting her anonymity and confidentiality.

“I was clear I did not have her permission to share her disclosure with anyone else.”

The conversation is believed to be the first known disclosure of sexual harassment allegations made to a member of the Scottish Government about Mr Salmond.

Asked whether the disclosure was the first allegation about Mr Salmond he had heard, Mr Somers said he was aware of an incident involving Edinburgh Airport staff dating from 2008, after Sky News approached the government about it in early November 2017.

He added: “I was aware he had a reputation for being forceful and at times intimidating.

“The only interaction I ever had with the former first minister was in my capacity working in China where I worked with him for five days.

“I didn’t encounter any of that behaviour and had no problems or issues.”