Salmond accusers reluctant to go to police before being ‘sounded out’, MSPs told 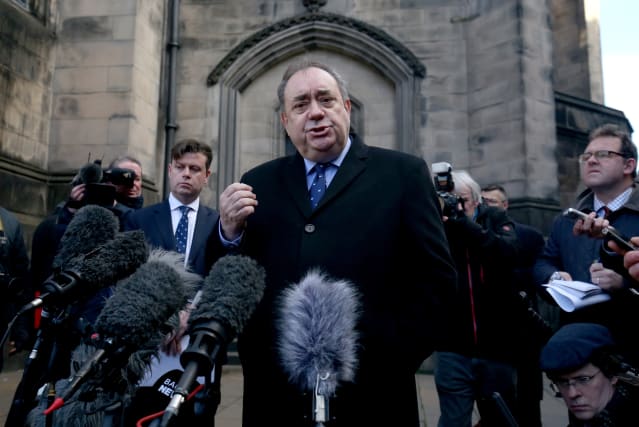 Alex Salmond’s complainers were reluctant to go to police before the Scottish Government’s investigating officer was asked to “sound them out” about reporting the former first minister, MSPs have heard.

The Holyrood inquiry into the Scottish Government’s botched investigation of Mr Salmond was told two of the women who had raised concerns were contacted by Judith Mackinnon to see whether they wanted to tell Police Scotland.

Meetings and conversations between Ms Mackinnon, the Scottish Government’s head of people advice, and two of the women who subsequently came forward led to the Court of Session to conclude the Government’s investigation was unlawful and “tainted by apparent bias”.

Ms Mackinnon told the Committee on the Scottish Government Handling of Harassment Complaints she did not think the women had planned to go to the police with their complaints about Mr Salmond.

Asked by Scottish Conservative MSP Murdo Fraser whether the two women she had spoken to were “reluctant” to report their allegations to the police, Ms Mackinnon said: “You could say that.

“I don’t think it had been their intention, when they initially had come forward, to do that.”

One of the women who was considering making a complaint was also shown a draft version of the complaints procedure.

Ms Mackinnon stressed the decision to share the draft policy was not done to encourage the person to make a complaint once it had been approved.

She said: “It wasn’t about inducing them to do anything, it was just part of the normal process – to share with individuals considering making a formal complaint what a process might look like and what to expect.”

Ms Mackinnon, giving evidence virtually for a second time with just the audio broadcast publicly, again insisted she was always open about her prior contact with the complainers.

“Nobody had raised a concern about that, they know about it, everyone knew about it,” she said, although she revealed the Scottish Government’s legal counsel had not been aware before October 2018.

There were 10 or 11 women who came forward with complaints in November 2017,  she revealed, although she declined to say how many related to the former first minister.

They were told to contact police directly rather than the Scottish Government investigating these later claims, she said.

After the evidence session, committee member and Scottish Labour deputy leader Jackie Baillie said: “It is clear that the role of the investigating officer was less than impartial and there was prior involvement with the complainants before she was appointed.

“It also seems that civil servants rushed complainants into submitting formal complaints long before the policy in place was fit to support them, and pushed for complaints to be made to the police.”

Mr Salmond was cleared of 13 charges of sexual assault, attempted rape and indecent exposure following trial at the High Court in Edinburgh in March.