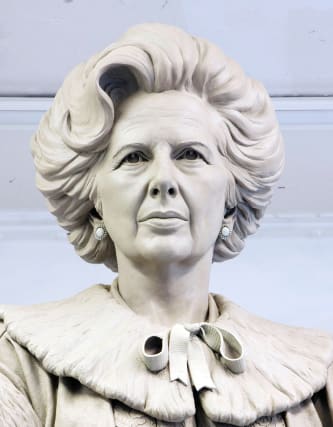 A large-scale £100,000 unveiling ceremony for a statue of Baroness Margaret Thatcher has been approved, despite plans for an "egg throwing contest".

In February last year, a planning committee unanimously voted in favour of the £300,000 statue – which was originally intended for Parliament Square in Westminster.

It is now set to stand on a 10ft-high granite plinth in Baroness Thatcher's home town of Grantham, Lincolnshire, due to fears of a "motivated far-left movement... who may be committed to public activism".

The unveiling ceremony, approved by South Kesteven District Council on Tuesday, has also attracted attention from protestors despite the council leader describing it as a "fantastic opportunity for the Grantham community to celebrate its heritage".

A report to the council meeting invited its Cabinet to approve the installation of the statue on St Peter's Hill Green, in accordance with agreed planning permission.

The official report proposed expenditure of up to £100,000 to "underwrite" the statue unveiling event and any consequential works, alongside contributions from the community and businesses.

It is envisaged that an external organisation will be engaged to coordinate the unveiling – including event management and communications – and the fundraising campaign.

The report stated: "The unveiling of the statue provides an opportunity for Grantham's community to celebrate its heritage.

"The event will be used to promote 'Inspirational Women of South Kesteven' including Edith Smith who served in Grantham as the first female warranted police officer in the country.

"There is an element of cost to hold any successful large scale event which will also include essential elements to ensure that security and public safety is maintained."

Commenting on the unveiling ceremony at a council meeting, council leader Kelham Cooke said: "As our communities bear the brunt of the economic fall-out of the pandemic – with many of our businesses and tourist attractions struggling for their very survival – this event will, undoubtedly, draw a large number of visitors to the area.

"Importantly, the statue and unveiling event will give a much-needed boost to our local economy.

"As we would all expect, an event of this scale does incur significant costs.

"That's why, this report recommends that the cost of this event is financed through a comprehensive fundraising campaign.

"This is a very crucial point – our expectation is that the cost of the event will be fully met through voluntary donations, not the public purse."

By approving planning permission for the statue last year, South Kesteven District Council chose to dismiss objections from the public, which included the potential for crime and disorder, Mrs Thatcher's "divisive" policies, and public cost implications.

Currently, the only marking of Baroness Thatcher in the town is a plaque on the corner of North Parade and Broad Street to show where she was born.

Explaining why he believed the unveiling event was justified, Cllr Cooke continued: "For an event of this scale, the report recommends that we use an experienced events company to ensure that the event operates safely and effectively.

"Before we go through the report in detail, I would like to say that I do understand that there is great debate about the legacy of Baroness Thatcher.

"Indeed, over the last few days we have seen this play out across both local and national press, and social media.

"However, what cannot be disputed is that this major event provides a fantastic opportunity for the Grantham community to celebrate its heritage and to promote the district of South Kesteven to both national and international audiences.

"In what is one of the most challenging periods of our lifetime, holding a major event of this scale and maximising the opportunities for our local economy is, I believe, the right thing to do for our communities and businesses."

Around 2,400 others visited the Facebook page to say they would go to the event including "egg throwing... and potentially graffiti art".