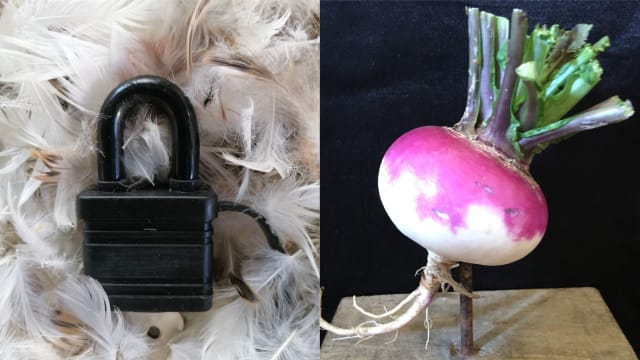 A gardener from Barnstaple, North Devon has been awarded first place at the spoof art award The Turnip Prize.

At a ceremony held on Zoom, the award was given to Herewe Goagain for her work titled Lockdown, which depicted a padlock on top of a pile of duck down feathers.

The winner said: “It has always been an ambition of mine to express myself through crap art.

“Once the seed was sown, the idea germinated, shoots burst forth into a luxuriate masterpiece.

Entrants to the spoof prize are asked to take the “least amount of effort possible” to create their artworks.

The award, a turnip mounted on a six-inch nail, was given to the 53-year-old in front of the six finalists.

Organiser Trevor Prideaux said: “I am delighted with the lack of effort taken to create this work.

“This year’s event attracted a record total of 120 entries.

“It’s fantastic that Herewe has won. She clearly has what it takes to be recognised in modern art circles and will be remembered in art history for no time at all!”

The finalists’ work will be on show at The New Inn in Wedmore, Somerset, from Thursday.