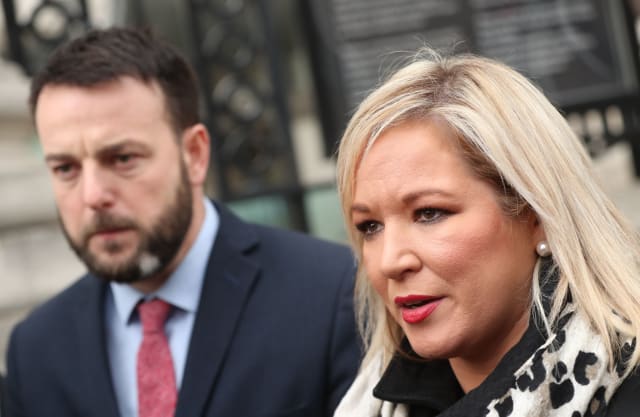 Four Stormont parties have called on the Government to reconsider the decision not to hold a public inquiry into the murder of Pat Finucane.

The ruling out of an immediate inquiry has been branded an insult by the family of the late Belfast solicitor, who was gunned down by loyalist paramilitaries colluding with the state.

On Monday, Northern Ireland Secretary Brandon Lewis said he was not taking a public inquiry off the table but said further examinations of the case by police and a police watchdog should conclude first.

The four parties wrote to Mr Lewis as Mr Finucane’s son John signalled an intent to enlist the support of President-elect Joe Biden.

Taoiseach Micheal Martin, who has criticised the failure to order an inquiry, also indicated that he would raise the issue with Mr Biden.

They said the Government’s decision was “neither a credible nor tenable position”.

“It was an insult to the Finucane family,” the senior party figures added.

“Your approach to this matter is now a matter of serious public concern.

“To avoid a public inquiry, you have clearly made a calculated decision to embark on a high-risk distraction strategy that now places both the Office of the Police Ombudsman and the PSNI in the midst of a historic murder investigation at a time when the intent is to take legacy out of policing.

“Your suggested approach potentially risks wider confidence in the rule of law and the administration of justice.”

The issue has divided political opinion in Northern Ireland and several unionist politicians have welcomed the Government’s decision, arguing that a public inquiry is not justifiable when so many other bereaved families remain waiting for answers.

On Tuesday, DUP MLA Paul Givan told the Stormont Assembly that the pain felt by the Finucane family was also felt by many other families.

“Of course the murder of Pat Finucane was wrong,” he said.

“I acknowledge the barbaric nature of it as he was murdered in front of his family. One can only imagine the trauma that that has caused and it is clearly evident to this day – 31 years later.

“Many of those families have had but a mere desktop exercise carried out by the Historical Enquiries Team (HET).”

Mr Givan said there had been multiple investigations into the circumstances of Mr Finucane’s murder.

“Thousands of victims of terrorism could only wish for the same level of interrogation to have taken place into the murder of their loved ones,” he said.

“Victims have heard loudly the special status being afforded to the Finucane family by a range of political parties in this House and, indeed, by other international political figures.”

Mr Finucane’s widow Geraldine and the couple’s three children were left furious after the Government said no to an immediate inquiry.

“I appreciate he’s going to be in arguably the busiest role on the planet, so we aren’t blind to that, but President-elect Biden has already shown a clear interest in Irish affairs, he has history in supporting our campaign,” he told the BBC.

On Tuesday, Mr Martin told the Dail parliament in Dublin that sustaining international support for an inquiry was important.

“We can continue to work at an international level and European level and also in terms of international opinion, and indeed the support that we have in the United States from people like (Democratic Congressman) Richie Neal and others,” he said.

“And of course enlist the engagement of President-elect Joe Biden.”

Explaining why the Government had decided against a public inquiry at this stage, Mr Lewis told Parliament on Monday that outstanding issues before the Police Ombudsman’s office concerning original police investigations should be addressed first.

He said there could also be a review of the case by police officers at the start of next year, potentially carried out by a force from outside Northern Ireland.

Following Monday’s announcement, the chief constable of the Police Service of Northern Ireland (PSNI), Simon Byrne, made clear there were no new lines of inquiry in the case.

The Police Ombudsman has said the Finucane case is not currently central to its workload and resources would dictate when it could shift focus on to that investigation.

But the judges found that the Government had been justified in later deciding against holding one.

Amid an almost two-year Government delay in responding to the judgment, Mrs Finucane took fresh judicial review proceedings against the state.