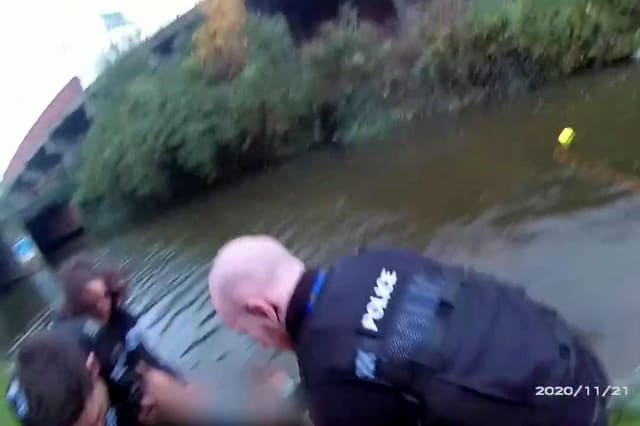 This is the moment a brave police officer and paramedic dive into chilly water to save an unconscious woman who was moments from drowning.

Dramatic body-worn camera footage shows the emergency workers sprinting along the towpath of the Nottingham Canal at 8am on November 21.

PC Lee Lane removed his stab vest and taser before diving in with the paramedic, who has not been named.

Lane had to put her on his shoulders after the paramedic grabbed her but wasn't able to pull her out.

Voices can be heard saying "are you breathing? Deep breaths" before paramedics wrap the "cold and pale woman" in a foil blanket.

She was taken to hospital and later discharged.

East Midlands Ambulance Service and Nottinghamshire Police were called to reports that a woman was in difficulty after falling in near London Road in Nottingham.

PC Lane, of three years' service, said: "I could see the woman struggling to keep her head above the murky water.

"As we ran closer she then became unconscious and was drowning.

"As I was running towards her with the paramedic I took my Taser vest and stab vest off before we both jumped in the water.

"I was just thinking we had to get to her before she died. The water was freezing cold and I didn't realise how deep it was, with the water coming up to my shoulder.

"The paramedic grabbed hold of her first but was struggling to pull her. I managed to put her on my shoulders and we were then able to drag her out of the water to safety.

"She was really cold and pale. My colleagues were able to provide first aid and clear the water from her lungs as she regained consciousness.

"We then covered her with a blanket to keep her warm until the ambulance arrived."

"Myself and the police officer realised that she would not resurface and both of us knew then that we had to jump in to rescue her.

"Despite how cold the water would have felt, I didn't feel it at the time because my ultimate goal was to save this woman, so the adrenaline had kicked in."

Inspector John Lees, of Nottinghamshire Police, said: "This was an exemplary piece of work by all of the officers involved, working together to save this woman in very challenging circumstances.

"They conducted themselves in a truly inspirational way, showing real courage and determination and working together to rescue her from the canal.

"They demonstrated superb teamwork under pressure and immense commitment to protect life.

"They should all feel very proud and really deserve recognition for what they did."

Executive medical director at EMAS Dr Leon Roberts MBE said: "We are immensely proud of our staff and especially when they go above and beyond to ensure that the health and wellbeing of our patients is their top priority.

"This incident was time critical and it was in the patient's best interest that a rapid decision was taken about effecting a rescue.

"Our frontline crews perform dynamic risk assessments at the scene of incidents before they do anything else and our paramedic made the right call in taking off his boots and high-vis jacket to make sure he was not going to be pulled under the water himself.

"The actions of our heroic paramedic, alongside the police, undoubtedly saved the life of the woman who found herself in difficulty in the cold waters of the canal."

PC Lane and the EMAS paramedic have been put forward for a future Nottinghamshire Police Award in recognition of their brave actions.