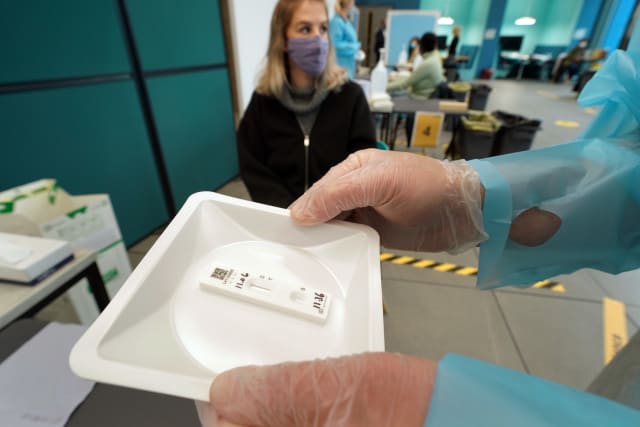 Students will struggle to “comply fully” with self-isolation rules if they test positive for Covid-19 before Christmas due to a lack of financial support from the Government, a union has warned.

Universities across the UK are rolling out mass asymptomatic coronavirus testing this week in a bid to get students home safely for the festive break.

Temporary testing centres are being set up on campuses ahead of the seven-day “travel window” in England – where students who test negative can return to families from Thursday.

If they test positive as part of the scheme – which has to be completed by December 9 –  students will be required to self-isolate at their university for a period of 10 days.

But the National Union of Students (NUS) has warned that students may struggle to self-isolate fully if they test positive because of inadequate support from universities and the Government.

And many students who do want to take a rapid coronavirus test may not have access to one before travelling home to their families due to “capacity issues,” the organisation has said.

Most universities are providing the asymptomatic Covid-19 tests, which are voluntary for students,  but the scheme will not be available in all institutions.

Hillary Gyebi-Ababio, vice president for higher education at the NUS, said: “We know that students want to get home and want to protect their loved ones and the wider public.

“However, there are serious obstacles in place that this government needs to address if they really want to see students really benefit from this testing regime.”

She added: “NUS is concerned that many students will simply not have access to this testing regime due to capacity issues. If students test positive and have to self-isolate there is currently no guaranteed government or university support for them.

“Students remain unjustly excluded from the £500 low-income self-isolation payment and many will struggle as a result to comply fully. Students have been asked to sacrifice a huge deal throughout this pandemic and have been offered almost nothing in the way of support and this has to change.”

Professor George Holmes, vice chancellor of the University of Bolton, told the PA news agency that the institution has written to students to encourage them to take the rapid tests this week.

“There are notices all around the campus saying ‘make sure your family is safe this Christmas, or as safe as they can be. Make sure that you’ve been tested if you’re travelling. It’s your responsibility but look after your health, look after your family’,” Prof Holmes said.

Students at Bolton have been asked to take two tests a few days apart at a testing centre at the university’s sports and wellbeing hub from Wednesday.

When asked whether he thought students may avoid tests so their pre-Christmas plans are not scuppered if they test positive, Prof Holmes said: “We’ve actually put that out in a message through the SU (Students’ Union) saying that’s not a very smart thing to do because you might get home and then sadly infect and make seriously ill an elderly relative.

“So we’re trying to push that that’s not a wise idea. Of course somebody may do that but from my take on it we’re seeing sensible behaviour all through the term so why wouldn’t they be sensible now?”

He added: “It’s much better to (self-isolate) than to go home and infect an entire family or, heaven forbid, end up with an elderly relative in hospital or worse.”

It is unclear yet how many students will sign up to the voluntary tests.

Nick Hillman, director of the Higher Education Policy Institute (HEPI) think tank, said take up is likely to differ across institutions due to different numbers of commuter students who go home daily.

He added: “I would encourage all students to consider taking the tests but equally remind them that the tests are not 100% effective and a negative result does not therefore mean they can afford to take undue risks.

“Now there is light at the end of the tunnel, we must do all that we can to stay on the track.”

It comes as the University and College Union (UCU) has accused ministers of “gambling” with the safety of the nation by betting everything on an “untried testing” scheme and a mass movement of students.

UCU general secretary Jo Grady said: “There is a worrying lack of support for students forced to self-isolate after testing positive. It is not good enough for the Government to refer to a non-binding checklist for how universities should support students that was issued in early October, when we have just seen a wave of protests from students opposing how they have been treated.”