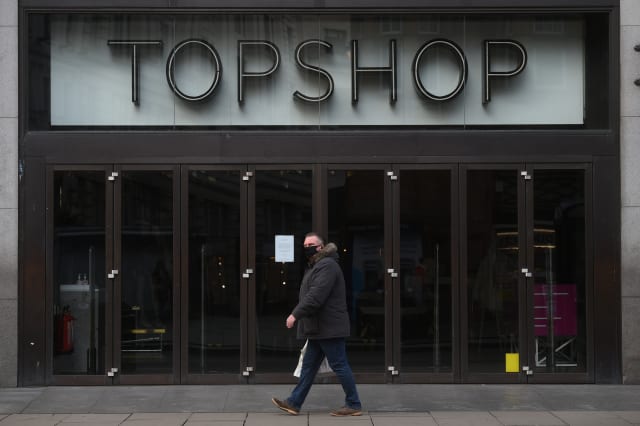 The high street giant, which includes the Topshop, Dorothy Perkins and Burton brands, has hired administrators from Deloitte after the pandemic "severely impacted" sales across its brands.

The group, which runs 444 stores in the UK and 22 overseas, said 9,294 employees are currently on furlough.

No redundancies are being announced yet as a result of the appointment and stores will continue to trade, the administrators said.

Ian Grabiner, chief executive of Arcadia, said: "This is an incredibly sad day for all of our colleagues as well as our suppliers and our many other stakeholders.

"The impact of the Covid-19 pandemic, including the forced closure of our stores for prolonged periods, has severely impacted on trading across all of our brands.

"Throughout this immensely challenging time our priority has been to protect jobs and preserve the financial stability of the group in the hope that we could ride out the pandemic and come out fighting on the other side.

"Ultimately, however, in the face of the most difficult trading conditions we have ever experienced, the obstacles we encountered were far too severe."

Matt Smith, joint administrator at Deloitte, said: "We will now work with the existing management team and broader stakeholders to assess all options available for the future of the group's businesses.

"It is our intention to continue to trade all of the brands, and we look forward to welcoming customers back into stores when many of them are allowed to reopen.

"We will be rapidly seeking expressions of interest and expect to identify one or more buyers to ensure the future success of the businesses.

"As administrators we'd like to thank all of the group's employees, customers and business partners for their support, at what we appreciate is a difficult time."

Earlier on Monday, Mike Ashley's Frasers Group said an offer for a £50 million lifeline for Arcadia was rejected.

It came as MPs called on Sir Philip to cover a shortfall in the pension scheme and urged the pension watchdog to fight on behalf of the group's workers.

Stephen Timms, chairman of the Work and Pensions Committee, called on the tycoon to stump up funds to fill the pensions black hole, which is estimated to be as large as £350 million.

It is the latest retailer to have been hammered by store closures during the coronavirus pandemic. Rivals including Debenhams, Edinburgh Woollen Mill Group and Oasis Warehouse have all slid into insolvency since lockdown measures were first imposed in March.

Earlier this year, the group revealed plans to cut around 500 of its 2,500 head office jobs amid a restructure in the face of the coronavirus crisis.

Frasers Group, which runs Sports Direct, told the London Stock Exchange earlier on Monday that a £50 million loan aimed at keeping Arcadia afloat had been rejected.

The company said: "Frasers Group can confirm that Arcadia Group Limited have declined Frasers Group's offer of a lifeline loan of up to £50 million.

"Frasers Group were not given any reasons for the rejection, nor did Frasers Group have any engagement from Arcadia before the loan was declined."