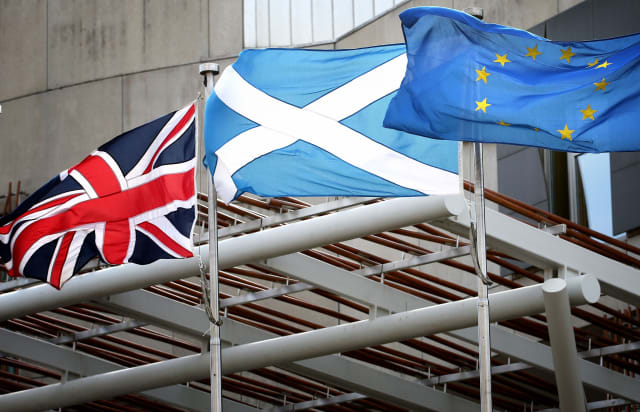 Scotland should aim for full EU membership if it becomes independent, the country’s Constitution Secretary has said.

Mike Russell said he would not like a “halfway house” of European Economic Area (EEA) membership.

The EEA consists of members of the EU along with Liechtenstein, Iceland and Norway, through the European Free Trade Agreement (EFTA) which grants the free movement of goods, people, services and capital within member states.

Addressing a fringe event at the SNP conference on Monday, Mr Russell said: “I’ve been on record as wishing to see Scotland rejoin the EU and to that extent a halfway house is not what I’m looking for.”

The Constitution Secretary said it is a sign of Scotland’s “goodwill and intent” that the position is to return to the bloc as a full member state.

He added: “I’ve met with EFTA and quite clearly there are some issues that would be more easily addressed by that route.”

One of the major arguments during the 2014 referendum campaign was an independent Scotland’s accession to the EU, with contradictory points being made by both sides on the issue at the time.

The No campaign declared the only way for Scotland to remain in the EU was to stay in the UK, a claim which surfaced again after the Brexit referendum in 2016.

Mr Russell added: “Other people have argued for an EFTA/EEA solution in the interim but some countries seem to get stuck there.

“My own preference is to go for full membership and that remains the position of the Government.

“I’m one of those politicians who thinks that if you have a conviction of something you think is right, you should go for what is right and I think membership of the EU is precisely right for Scotland,” he said.

Professor Nicola McEwen, the co-director of the Centre on Constitutional Change, said readmission to the EU is not a foregone conclusion for an independent Scotland.

For Scotland to return to the EU, the manner in which it becomes independent will have to be “within a constitutional framework” and not a unilateral declaration – a point repeatedly made by First Minister Nicola Sturgeon.

Some SNP members have attempted to push the party into discussing a so-called “plan B” for independence if the Prime Minister refuses to grant powers for a second vote, with Western Isles MP Angus MacNeil calling for the 2021 election to be treated as a de facto referendum.

Prof McEwen added: “If the process is seen as legitimate, there’s no doubt in my mind that Scotland would be considered to be a candidate country, but that’s not necessarily the same as convincing all of the EU member states that there is commitment to the European project.”

The professor expressed doubts Scotland would have “friends” within the EU willing to “run to its defence”.

She instead stressed Scotland must ensure the process is legitimate and have committed to the rules and regulations of the EU.