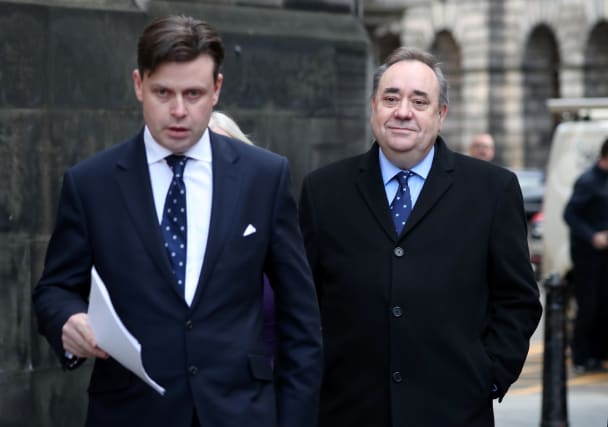 The Holyrood inquiry into the Scottish Government’s unlawful investigation of Alex Salmond has told the former minister it will not pay for his lawyers’ expenses as a row over releasing documents continues.

Mr Salmond’s legal team asked the parliamentary committee and the Scottish Government to help pay his legal costs for the work required by the inquiry.

In a letter sent to both Deputy First Minister John Swinney and the committee on November 20, Levy and McRae argued it “cannot be fair” Mr Salmond has to fund efforts to provide evidence to the inquiry.

They asked for public money to “fund our client supporting the work of the committee”, similar to the Scottish Government and the inquiry itself.

In reply, convener of the Committee on the Scottish Government Handling of Harassment Complaints, Linda Fabiani refused the request.

Ms Fabiani explained the committee is seeking the release of disputed documents from the court – rather than asking Mr Salmond to do this – and is also willing to accept any submission of evidence at this stage, “even if it is a partial one”.

She wrote: “The committee acknowledges the workload and associated costs involved in the processing of documents your client holds to comply with the committee’s statement on evidence handling.

“In addition, the committee recognises the position of your client as a private citizen without access to the resources of the Scottish Government or the Scottish Parliament.

“However, our letter of November 6 2020 sets out measures which the Scottish Parliament has taken to seek to facilitate the release of documents which are likely to be of relevance to your client’s submission.

“In addition the committee has made it clear that it is willing to accept a submission from your client to the extent to which he is able at this point in time, even if it is a partial one.

“On that basis, and having discussed your letter of November 20, the committee does not consider it can meet your request to fund your client to support the work of the committee.”

In the letter appealing for financial support, lawyer David McKie wrote: “It cannot be fair that our client has been left to fund this personally when both the inquiry and the Scottish Government have legal support provided by the public purse.”

It comes as MSPs on the committee continue their efforts to have legal documents handed over to them – with ministers so far resisting all calls to do so.

Mr McKie said many of the documents now being discussed “have never been produced or seen by us or by our client previously”, adding there is “significant documentation which our client wishes to discuss with us and on which he requires to take legal advice”.

But he said Mr Salmond – who raised more than £100,000 in a crowdfunding campaign to help with the costs of his legal challenge against the Scottish Government – has been “put at a significant financial disadvantage in this whole process”.

The former first minister was awarded £512,250 after the Court of Session ruled the Scottish Government’s handling of the allegations was unlawful and “tainted by apparent bias” because of prior communication between two women who accused Mr Salmond of sexual harassment and the investigating officer Judith Mackinnon.