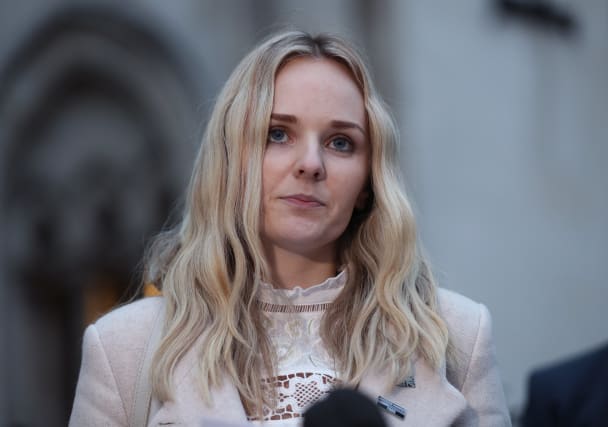 Pc Andrew Harper’s widow has vowed to continue the “agonising battle for justice” as she awaits the result of a bid by the Attorney General to increase the sentences of her husband’s killers.

Henry Long, 19, was jailed for 16 years and 18-year-olds Jessie Cole and Albert Bowers were handed 13 years in July over the death of the Thames Valley Police traffic officer.

At the Court of Appeal in London on Monday, Attorney General Suella Braverman said the trio’s sentences should be increased, for an offence that was “as serious a case of manslaughter as it is possible to envisage”.

But lawyers representing Long, Cole and Bowers – who appeared by video link from HMP Belmarsh – argued that their sentences were too long and should be reduced.

At the conclusion of the hearing, Dame Victoria Sharp, sitting with Lord Justice Holroyde and Mr Justice William Davis, said the court would give its ruling on the appeals at a later date.

Speaking outside the Royal Courts of Justice after the hearing, Pc Harper’s widow Lissie Harper said: “I stand before you with my heart as heavy as it was those many months ago when I stood feeling let down and angry outside of the Old Bailey.

“Yet today I feel pride in myself for not settling for something that I see as unacceptable.

“Proud to fight for my heroic husband Andrew, as I also continue to push for the safety and justice of his fellow emergency service protectors in the future.

“Today has been as harrowing as you can all expect, however we leave this court with at least a sense of balance.

“Reaching a step closer to a fair outcome is something that I have strived towards for a long time.

“We have all hoped and prayed that our beloved boy’s death will not go improperly unpunished.

“So we continue with our agonising battle for justice, a journey that we have had to endure for too long.”

Mrs Braverman earlier told the court: “Pc Harper paid the ultimate price for his bravery and this should be reflected in the sentence.”

Referring to Long’s sentence, Mrs Braverman said: “A life sentence was the appropriate sentence for the first offender, who was and remains dangerous… if not in a case such as this, then when?”

She added that, if the court found Long’s sentence was unduly lenient, Bowers and Cole’s sentences “should also have been commensurately longer”.

In written submissions, Mrs Braverman said: “These are sentences that have caused and continue to cause widespread public concern. It appears to me that the sentences passed on the offenders were unduly lenient.”

Rossano Scamardella QC, representing Long, said Mrs Braverman’s comments about “widespread public concern” should have “no influence on the issue of whether this sentence ought to be adjusted one way or the other”.

He said: “Widespread public concern is not necessarily an indicator that something has gone wrong, either with a verdict or a sentence.”

He told the court Pc Harper’s death was the result of “a freakish accident” after he became attached to the back of the car, adding: “There was no intentional application of force or violence… there was no intent whatsoever to cause serious bodily harm or death.”

Timothy Raggatt QC, representing Bowers, said: “The idea that these sentences could be described as unduly lenient… is, to be blunt, far-fetched in the extreme.”

The court did not give any indication when it is likely to deliver its ruling.