Arcadia’s famous brands: How they grew to dominate the high street 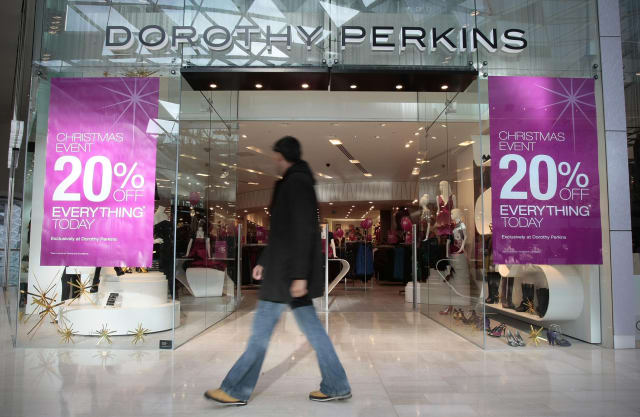 The PA news agency takes a look at the history behind Topshop, Burton, Dorothy Perkins, Miss Selfridge, Evans and Wallis.

Topshop is arguably the most recognisable of Arcadia’s current brands but grew from the humble beginnings of the basement floor of a Sheffield department store.

The new line quickly became popular with large concessions across the nationwide department store chain, before bagging the first standalone Topshop in 1970.

In the same year, it launched the Topman brand which soon garnered its own rapidly expanding network of stores.

In 1992, Topshop and Topman joined forces to open their flagship store on Oxford Street, which claimed at the time to be the largest fashion store in the world.

Topshop continued to grow and reached the height of its popularity after striking the first of 14 collaborations with supermodel Kate Moss in 2007.

Moss was the face of the brand for another three years in which Topshop crossed the Atlantic to open its first store outside the UK, in New York.

However, the chain’s US stores all shut last year as part of a major restructuring designed to secure Arcadia’s long-term future.

The foundations of menswear brand Burton, and the entire Arcadia Group, were laid when 15-year-old Meshe David Osinsky joined the thousands of Jews fleeing westward from Russian persecution and made his way to the UK.

Four years later, he opened his first store in Holywell Street, Chesterfield, after borrowing £100 from a relative to set up The Cross-Tailoring Company.

The founder, who changed his name to Montague Burton in 1909, steadily expanded his business after tapping into growing demand for affordable and smart menswear, working with the mantra that “good clothes develop a man’s self-respect”.

The business changed from making suits to uniforms during the First World War and continued its expansion efforts in post-war Britain to achieve 400 stores by 1929, when it went public on the London Stock Exchange.

The group, which then became known as House of Burton, continued to grow as it turned its attentions to snapping up rivals or merging with competitors to become a mainstay of the high street.

It purchased Jackson The Tailors in 1954 before making deals with a raft of other stores after rebranding as Arcadia Group in 1967.

It sealed deals with Dorothy Perkins, in 1979, and Debenhams, six years later. However, Debenhams – which is currently in administration itself – split away from the retail empire in 1998.

First incorporated on December 6 1909 as HP Newman & Co, the company changed its name to Dorothy Perkins in 1919. The name comes from a rose type and was said to be the suggestion of the wife of one of the company directors.

Initially it had 12 stores and by the start of the Second World War, this had grown to 75 sites, aimed at women on a budget looking for blouses and knitwear.

The retailer kept up with the fashion of the day and regularly turned out dresses, lingerie and hosiery for its loyal customer base. By 1966, the retailer opened its 250th shop and cash registers were put into all its stores.

At around that time it was owned by Alan Farmer and his family, and he would regularly visit stores and had his picture in the booklet for new employees.

The company also assisted with London fashion store Biba’s launch in 1964 on High Street Kensington in the famous Barkers building and subsequently owned a stake in the firm during the 1970s.

By 1979, it was bought by the Burton Group – subsequently Arcadia – and continued to grow with the launch of a maternity range, loyalty cards and expensive advertising campaigns.

At its peak, there were close to 1,000 Dorothy Perkins on UK high streets and as recently as 2007, 600 remained open, including stores across Spain, Cyprus, Tukey and Singapore.

Miss Selfridge has similar roots to its Topshop sister business, as it also started life in a famous department store, sprouting from the young fashion section of Selfridges in London in 1966.

The business got its name when Charles Clore, the owner of Selfridges at the time, saw a window display in the Bonwit Teller store in New York which showed “Miss Bonwit” dresses aimed specifically at teenagers.

The first of Miss Selfridge’s mannequins were based on Sixties model Twiggy, with the first dresses made from paper and designed to be worn once and then thrown away.

In 1967, Miss Selfridge concessions were opened more widely before it opened its first independent stores in Croydon, Brighton, Regent Street and Brompton in 1969.

It focused on innovation aimed at young shoppers and became the first fashion retailer to launch its own make-up range, Kiss & Make Up, in 1978.

In 1999, it was sold to Arcadia as part of the Sears Group, alongside Wallis and Outfit.

The Evans brand was launched on February 21 1936 as the UK’s first fashion retailer aimed at plus-sized women. It was originally called Evans Outsize but the Outsize was subsequently dropped.

In 1971, it was bought by the all-powerful Burton (later Arcadia) Group but would continue to trade separately, catering to its growing audience.

At the same time, Evans launched a mail order service – one of the first dedicated to plus-sized customers – and would grow to become the dominant brand for women’s clothing above a size 14.

By 1997, innovation would continue as it became the first Arcadia brand to launch an online store alongside its mail order catalogue.

It would continue to enjoy success and launched ranges with models and celebrities including Beth Ditto and Dawn French.

Wallis was seen as the higher-end version of its sister brand Dorothy Perkins and can trace its roots back to a market stall in Chapel Market, Islington, in 1923.

Founded by Raphael Nat Wallis as NW (Costumiers), he sold coats for 19 shillings and fashionable dresses for 43s/6d, and it quickly expanded.

Taking its influence from French fashion houses Chanel and Dior, the company would thrive during the 1950s and 60s, with Christine Keeler wearing a different Wallis outfit during each appearance at the Profumo affair trial.

In 1969, Jeffrey Wallis, the son of founder RN Wallis, said of the Paris influences for the designs: “We never adapt, we copy. Couture designers are geniuses. We only simplify.”

By 1976, the company listed on the stock market and had 54 stores, including sites in Germany, Switzerland and Sweden, and was eventually bought by Sears in 1980, before being transferred to the Arcadia brand.