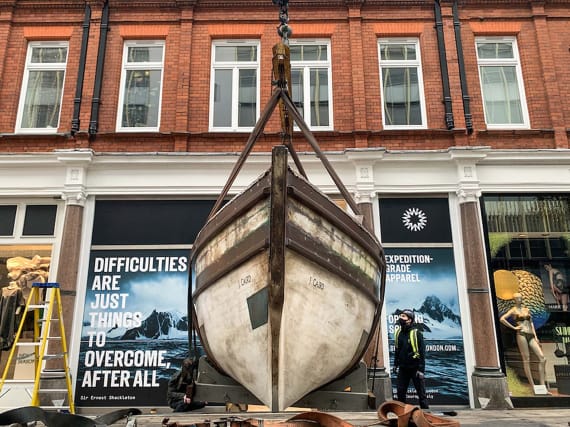 An outdoor clothing brand inspired by explorer Sir Ernest Shackleton has said “difficulties are just things to overcome” as it prepares to open a new store during the Covid-19 pandemic.

Traffic was temporarily halted on the King’s Road in central London this weekend as a replica of a lifeboat used by the famous explorer to escape Antarctica was installed in the new shop.

The 23ft-long craft, named the James Caird, is the centrepiece of a pop-up store from British apparel brand Shackleton due to open in Chelsea on Wednesday.

The four-year-old expedition-grade clothing maker, which designs and manufactures its products in the UK and Italy, draws its inspiration from Shackleton’s life.

Shackleton was the leader of an ill-fated expedition across Antarctica that turned into a remarkable story of survival more than a century ago.

The Endurance Expedition from 1914 to 1917 was an attempt to make the first land crossing of the continent, but early in the journey the ship and its 28-man crew became trapped in the pack ice of the Weddell Sea.

It drifted northward throughout the Antarctic winter of 1915 and was crushed and sank, stranding the crew on the ice.

After months spent in makeshift camps, the party took to three lifeboats to reach the inhospitable and uninhabited Elephant Island, and Shackleton and five others made an 800-mile open boat journey on the James Caird to reach South Georgia to raise the alarm before returning to rescue those still stranded.

Martin Brooks, co-founder of the Shackleton brand, told the PA news agency: “It’s an incredible story of leadership, and courage and survival against all the odds, so we built our brand inspired by him.”

He said the company, which has the explorer’s granddaughter Alexandra Shackleton as one of its shareholders, decided to “overcome the odds of lockdown” by opening its four-month long winter pop-up store.

Mr Brooks said the “perfect” replica of the two-tonne James Caird, which itself made the original’s famous journey in 2015, was craned into the store on Sunday morning.

“It took a lot of wrangling with Kensington and Chelsea council as you’d imagine,” he said.

“But finally we managed to get a permit to lift this thing off at eight o’clock am on Sunday morning.

“We had traffic marshals and it was right opposite a bus lane as well so we had to close the road for a short while, but we managed to get it in.

“We had to take all the glass off the front of the store, get it all back on again… it was a bit against the odds.”

Mr Brooks highlighted one of Shackleton’s own “wonderful” quotes that has featured on the store’s windows while it waited to open: “Difficulties are just things to overcome after all.”

The replica lifeboat will be accompanied in the store by a film showing photos and archive footage from 1915.

Mr Brooks, who also runs adventure trips to Norway and Antarctica with his co-founder Ian Holdcroft, admitted they had discussed if it was a “fool’s errand” to open a store during the Covid-19 pandemic which has brought closures and jobs losses to the retail sector.

He added: “We debated it a lot as to whether it was a fool’s errand, it was a stupid thing to do, or whether actually it was a signpost that difficulties are just things to overcome after all.

“We always wanted to do a winter store because we’re a winter brand and we just wanted to inspire people with that kind of Shackleton courage and grit to kind of say ‘look it can be done you’ve just got to grit your teeth and get on with it and make things work’.

“I guess it’s quite a British stalwart kind of attitude that we’re trying to foster for our brand.”

– The Shackleton store will open at 11 Kings Road on December 2.