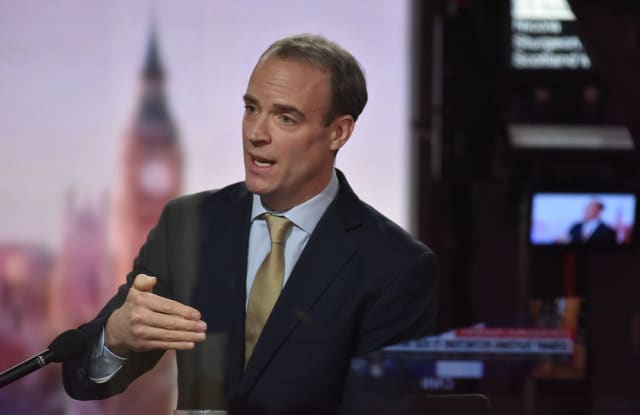 England could face a third wave of coronavirus if ministers fail to “get the balance right” with restrictions, the Foreign Secretary has said, as he tried to persuade Tory rebels to back the tier system.

Dominic Raab refused to rule out a third national lockdown if there is another spike in cases in the new year, saying only that the Government was “doing everything we can to avoid that”.

But he sought to win over his Conservative colleagues who are critical of the three-tier system ahead of a crunch Commons vote on the measures on Tuesday when MPs could reject the plan.

Mr Raab insisted the restrictions – which will place swathes of England under stringent rules – are necessary to “bear down” on the pandemic and keep the country out of a national lockdown.

But he said tiers would be downgraded in areas where the virus is in retreat, telling Sky’s Sophy Ridge On Sunday: “We are starting with a more restrictive approach than previously with the localised approach.

“But that allows us to ease up when we are confident the virus is going down and stabilised – there’s a review every two weeks.”

Mr Raab said that, with testing, “those two things are the crucial bridge to that light at the end of the tunnel in the spring”.

And in an interview with BBC One’s The Andrew Marr Show, he said there was a “risk” of a third spike in case numbers “if we don’t get the balance right”.

Asked whether there would be another national lockdown if people fail to comply with the rules, Mr Raab said: “We’re doing everything we can to avoid that.”

His comments came after Boris Johnson wrote to Conservative MPs offering them another chance to vote on the restrictions early next year, saying the legislation will have a “sunset of February 3”.

In a bid to head off a rebellion, the Prime Minister also said that at the first review of the measures on December 16 he would move areas down a tier where there is “robust evidence” that coronavirus is in sustained decline.

The vote after Christmas will determine whether the tier system stays in place until the end of March.

In a further olive branch to MPs, Mr Johnson committed to publish more data and outline what circumstances need to change for an area to move down a tier, as well analysis of the health, economic and social impacts of the measures taken to suppress coronavirus.

Labour shadow foreign secretary Lisa Nandy said her party’s support was “not unconditional” and that it was seeking “clarity” about the tier system.

Without Labour backing – and if Mr Johnson suffers a major rebellion – the Government could struggle to pass its motion on the tier system.

But the offer of more data and another vote appeared to appease some on his backbenches, with Pauline Latham, Conservative MP for Mid Derbyshire, saying she “might” support the Government.

“If we can see that then I do feel I might be able to support them, particularly as we’re looking at having another vote in January.”

Asked how strong the anger is among MPs and how many might rebel, she said: “I think it will depend very much on what Boris does between now and Tuesday.

“If he produces that evidence and he can prove to us that he’s got good evidence to go on then I think he won’t have a rebellion.”

Only the Isle of Wight, Cornwall, and the Isles of Scilly will be under the lightest Tier 1 controls, while large swathes of the Midlands, North East and North West are in the most restrictive Tier 3.

In total, 99% of England will enter Tier 2 or 3, with tight restrictions on bars and restaurants and a ban on households mixing indoors when the four-week national lockdown lifts on Wednesday.

Elsewhere Mr Johnson, writing in the Mail on Sunday, stressed that it was too early to relax restrictions, but said he believed Easter would mark a “real chance to return to something like life as normal”.

The Prime Minister said: “We can’t blow it now. We can’t just throw it all away – not when freedom is in sight. We have worked too hard, lost too many, sacrificed too much, just to see our efforts incinerated in another volcanic eruption of the virus…

“We are so nearly out of our captivity. We can see the sunlit upland pastures ahead. But if we try to jump the fence now, we will simply tangle ourselves in the last barbed wire, with disastrous consequences for the NHS.

“So let’s do the job properly. Let’s work together, and with tiering, testing and vaccines let’s make 2021 the year we kick Covid out, take back control of our lives and reclaim all the things we love.”