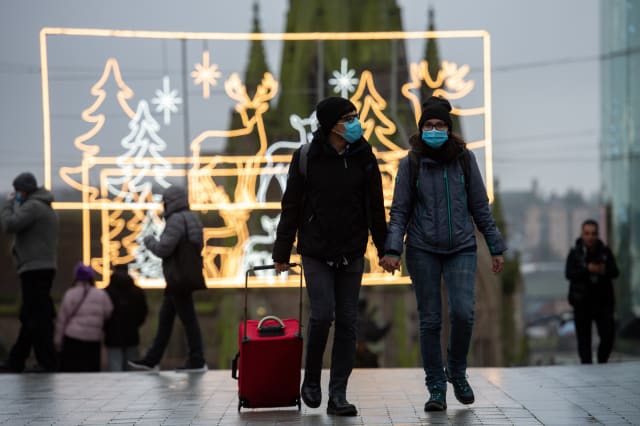 Boris Johnson will publish an impact assessment of coronavirus restrictions as he seeks to convince Conservative backbenchers to support the introduction of a new tier system.

The Prime Minister is expected to share analysis of the health, economic and social ramifications of the measures taken to suppress Covid-19 ahead of a crunch Commons vote on Tuesday.

Scores of Tory MPs have threatened to rebel over the new tier system in England, which the Government wants to bring into force on Wednesday when the national lockdown ends.

But despite offering them another chance to vote on the restrictions early next year – meaning the measures could lapse on February 3 – several said they still have reservations.

Conservative MP Peter Bone said he was “undecided” and would make his mind up after seeing the impact assessment, telling the PA news agency: “The dilemma I have is do we do more damage by the tiered system of lockdown, or do we do less.”

Another senior Tory backbencher said that his vote was “still in the balance” as he urged Mr Johnson to provide analysis of how the tier restrictions will affect businesses, saying he did not have confidence that the Government was really considering their needs.

Labour has not yet said whether it will support the tier system. If the party votes against it – and if Mr Johnson suffers a major rebellion from his own MPs – the Government could lose the vote.

However, the Prime Minister’s argument for stringent restrictions will be boosted by new figures suggesting coronavirus infections fell by almost a third in England during the second national lockdown.

There was a 30% drop in cases across the country over almost a fortnight this month, the latest interim findings from Imperial College London’s React study showed.

Regionally, the research suggests infections fell by more than half in the North West and North East, and were also down in Yorkshire and the Humber. But prevalence remained high in the East Midlands and West Midlands.

Professor Paul Elliott, director of the programme at Imperial, said the findings suggested the tiers before the beginning of November, followed by the lockdown, had helped bring cases down.

– A further 208 people who tested positive for coronavirus have died in hospital in England, while there were another 12,155 lab-confirmed cases of coronavirus in the UK.

– Labour leader Sir Keir Starmer is expected to hold talks with England’s chief medical officer Professor Chris Whitty on Monday, as he decides whether to support the Government’s tier system.

– The Prime Minister announced a £20 million boost for medicine manufacturing in the UK in a bid to strengthen the country’s response to future pandemics.

– The Telegraph said pubs and restaurants hit by the new restrictions would be given extra financial support to help them get through to Christmas.

Under the new restrictions only the Isle of Wight, Cornwall, and the Isles of Scilly will be under the lightest Tier 1 controls, while large swathes of the Midlands, North East and North West are in the most restrictive Tier 3.

In total, 99% of England will enter Tier 2 or 3, with tight restrictions on bars and restaurants and a ban on households mixing indoors.

As well as the post-Christmas vote, the Prime Minister said that at the first review of the measures on December 16 he would move areas down a tier where there is “robust evidence” that coronavirus is in sustained decline.

And Mr Johnson committed to publish more data and outline what circumstances need to change for an area to move down a tier. He also said the Government was looking at ways to improve communications so the public are able to make better informed decisions.

The letter contained further commitments to provide regular updates of compliance rates, to make greater use of local public health teams to improve contact tracing, increase testing asymptomatic carriers and improve the personalisation of advice to those most at risk.

Meanwhile, Government guidance published on Sunday to cover the Christmas period said door-to-door carol singers can spread their annual cheer – but only in groups of six and while keeping at least two metres away from “the threshold of any dwellings”.

And school nativity plays will be allowed to go ahead “within existing school bubbles” and avoiding any mixing across groups, but audiences will only be allowed to attend in Tier 1 and 2 areas – subject to “appropriate safeguards”.