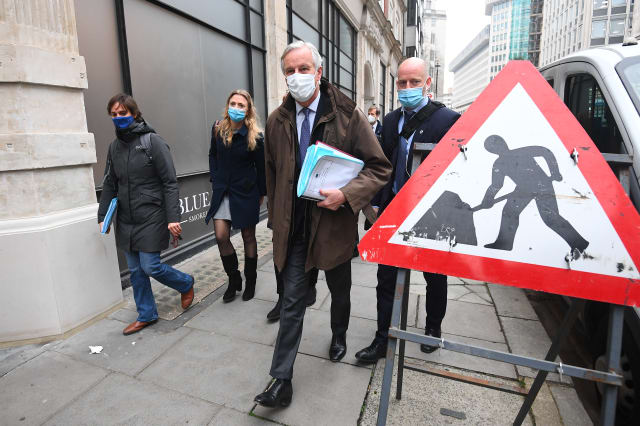 Crunch talks aimed at securing a post-Brexit trade deal between the European Union and UK will resume on Monday in what could be the final week of discussions.

The EU’s chief negotiator Michel Barnier and his counterpart Lord (David) Frost will meet again in London as they seek to hammer out an agreement.

With just a month to go until the end of the transition period, talks remain stuck on fishing rights – described by Dominic Raab as an “outstanding major bone of contention”.

But the Foreign Secretary said there was “a deal to be done” after the EU showed progress on the so-called level playing field aimed at preventing unfair competition.

Speaking on Sunday, Mr Raab said this could be the last week of “substantive” negotiations and urged Brussels to recognise the “point of principle” on Britain’s control of its waters.

“As we leave the EU we’re going to be an independent … coastal state and we’ve got to be able to control our waters,” he told Sky News.

Fishing rights as well as the governance of any deal and the “level playing field” have been the main stumbling blocks preventing the two sides from reaching a deal thus far.

But with time running short, the UK is urging Brussels to concede on fishing quotas so an agreement can be reached.

Without a deal, the UK will leave the single market and customs union on December 31, and trade under World Trade Organisation (WTO) terms.

A Number 10 source said over the weekend that the bloc “must understand that we are not going to sell out our sovereignty”.

Mr Barnier and Lord Frost resumed face-to-face talks in the capital on Saturday after negotiations were paused earlier this month when one of the EU team tested positive for coronavirus.