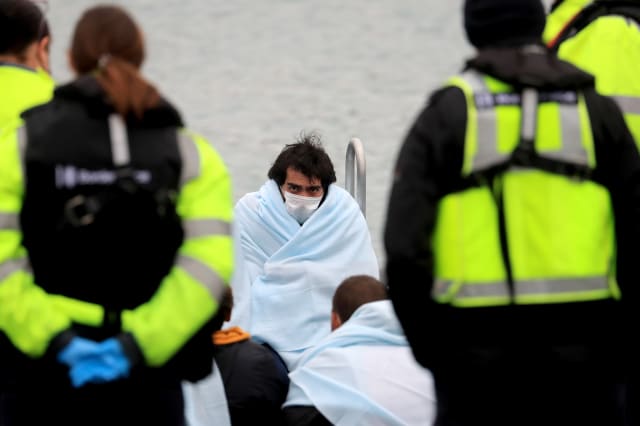 More than 8,000 migrants have crossed the Channel to the UK in small boats this year.

The numbers making the dangerous journey have been described as a "crisis" and several have died.

Migrants crammed into unsafe dinghies have reached the UK from France on more than one in every three days, data analysis by the PA news agency shows.

The number arriving each day is heavily weather-dependent, with fewer than 10 arrivals on some days and hundreds on others.

In September alone, nearly 2,000 migrants reached the UK, more than the figure for the whole of 2019.

Even as winter approaches, and weather conditions deteriorate, hundreds are teaching the south coast of England.

So far this month more than 600 people have been intercepted by Border Force and brought to the UK, with nearly 450 intercepted in October.

PA, which tracks and analyses numbers of migrant crossings, has compiled a list of five days this year when new records were set.

A huge wave of boats departed France, with hundreds of migrants making their way across a sunny, calm English Channel.

In the House of Commons, Prime Minister Boris Johnson faced questions over the Government's handling of the crisis.

Migrants arrived in the UK aboard 17 boats in what was at the time believed to be the highest number on record.

In one incident, Border Force apprehended 15 migrants who had landed at Dungeness beach in Kent.

The migrants said they were from a range of nationalities, including Yemeni, Palestinian, Ertitrean, Chadian, Egyptian, Sudanese, Kuwaiti, Iraqi, Iranian, Indian and Malian.

On the day Priti Patel announced a "new operational approach" to dealing with small boat crossings, a record number of migrants made it to the UK.

More than 380 had attempted the crossing, but the rest were intercepted by French authorities and returned to France.

Border Force and partner agencies dealt with eight incidents after being alerted to small boats in the Channel travelling towards the UK.