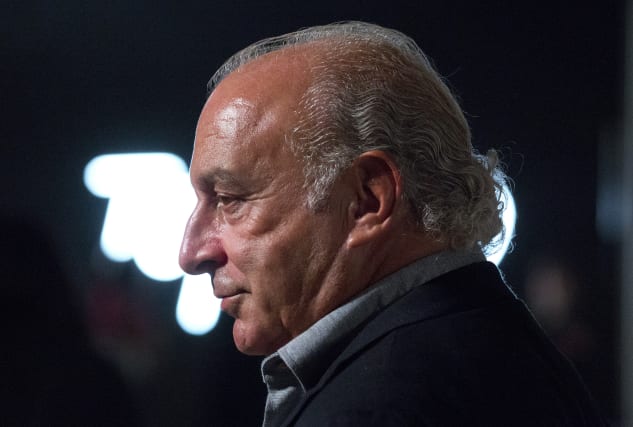 His rough-around-the-edges no-nonsense attitude and tendency to talk freely initially won him many friends in the press but, after a series of scandals, Sir Philip became persona non grata and faced calls to make him plain old Mr Green again.

Now Sir Philip Green is reportedly on the brink of appointing administrators to his company Arcadia, which owns Topshop and Dorothy Perkins, putting thousands of jobs on the line.

Born in south London in 1952 into a wealthy Jewish family which had made its money from a series of petrol stations, Sir Philip’s first big break came in the late 1970s, when he bought the stock of 10 designer outlets, and resold them from a shop in Mayfair.

He spent some time as chief executive and chairman of Amber Day in the late 1980s and early 90s, but left after the company missed a profit forecast, his last time working for a listed company.

It was not until the early 2000s that Sir Philip truly emerged into the limelight, when he bought department store BHS in a deal worth £200 million.

He subsequently bought Arcadia, which includes Topshop, Dorothy Perkins, and Burton, among other brands, in 2002 through his family-run business Taveta, of which his wife Tina, based in Monaco, is the director.

In 2005 Sir Philip paid himself £1.2 billion in dividends from Arcadia, more than four times the company’s pre-tax profit.

The money went to Tina in Monaco, meaning it was not taxed in the UK.

Around this time Sir Philip came close to buying Marks & Spencer in a £9 billion deal, but he pulled out before it was ever completed.

He initially turned around the loss-making BHS business, gaining plaudits in the process.

And despite murmurings over his dividend, Arcadia went from strength to strength, signing up celebrities such as Kate Moss and Beyonce to help flog its clothes.

For a time it was one of the most talked-about brands on the high street.

But, over time, a lack of investment and a failure to capitalise on the growing online market meant the brands failed to keep up with the changing face of retail.

The 2008 global recession would be the start of his empire’s undoing, with BHS sold in 2015 by Sir Philip to serial bankrupt Dominic Chappell for £1.

Just 11 months later the company finally collapsed and earlier this month Chappell was sentenced to six years in jail for tax evasion during his time running BHS.

Last year reports emerged that US investor Leonard Green & Partners sold its stake in Arcadia back to Sir Philip for one dollar, or 76p at the time.

The private equity giant had bought a quarter of Arcadia in 2012 for a rumoured £350 million.

The collapse of BHS was when the shine came off Sir Philip.

The closure cost 11,000 people their jobs and, perhaps more controversially, the company left a pension deficit of around £571 million.

The Pensions Regulator later said that Sir Philip’s main reason for the £1 sale a year before BHS’s collapse was to avoid the pension deficit that was hanging over the firm.

In 2016, MPs passed a non-binding motion to strip the businessman of his knighthood, but after he agreed to hand over £363 million for the pensioners, the calls died down.

But he was once again returned to the limelight in 2018, after the Telegraph reported that staff were accusing an unnamed businessman, later identified in Parliament as Sir Philip, of sexual harassment and racial abuse.

Despite many worries around the future of the business, Sir Philip has until now managed to hold onto Arcadia and keep it afloat.

In April last year he appointed restructuring experts to the company, as the business geared up for a series of Company Voluntary Arrangements (CVA), as part of a three-year recovery plan.

Landlords gave the green light to the plan in June.

More than 20 stores were closed and rents were cut on many more.