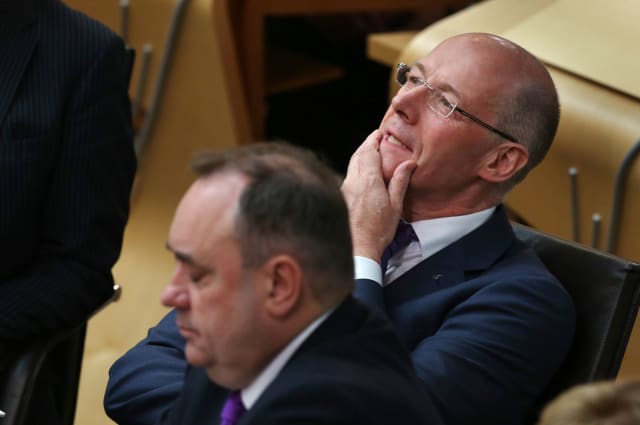 Former First Minister Alex Salmond and other influential figures in the Scottish Government were against holding an inquiry into the abuse of children in care, John Swinney has said.

Speaking at the Scottish Child Abuse Inquiry on Friday, the Deputy First Minister said there was clear division between ministers on the decision to hold a public investigation.

He said an inquiry was authorised “after the change of First Minister had taken place”.

James Peoples QC, senior counsel to the inquiry, said that on Thursday Mike Russell told him “influential figures, including Alex Salmond, Kenny MacAskill and the lord advocate were not persuaded” of the need for an inquiry.

Mr Swinney agreed, saying: “In 2014, there was a difference of views in Cabinet in the summer of 2014 if there should be an inquiry.”

Mr Peoples said: “Mike Russell described it as ‘quite robust’.

“He said one school of thought was that the time taken, the cost involved, didn’t support the need for a public inquiry.

“Whereas Mike Russell was putting forward another view of what do survivors want?”

Mr Swinney responded: “There was a perfectly respectable debate among Cabinet but there were two opinions.

“One argument was that the inquiry would not address the issues and would not deliver the outcomes survivors hoped for.

“Mike Russell had engaged heavily with survivors and his view was we had to confront this issue as a country, to do justice for survivors to enable them to have their experiences documented, understood and reflected on, and for the state to accept responsibility for what happened to them.”

He added: “I supported him in that view in Cabinet.

“The inquiry was authorised in December after the change of First Minister had taken place.

“Without a doubt, there was a division of views in Cabinet.”

The latest phase of the Scottish Child Abuse Inquiry, heard before judge Lady Smith, is exploring reasons why calls between August 2002 and December 2014 for a public inquiry to be held were resisted by ministers.

The current inquiry was set up in October 2015.

It is investigating abuse of children in care in Scotland or where their care was arranged in Scotland.