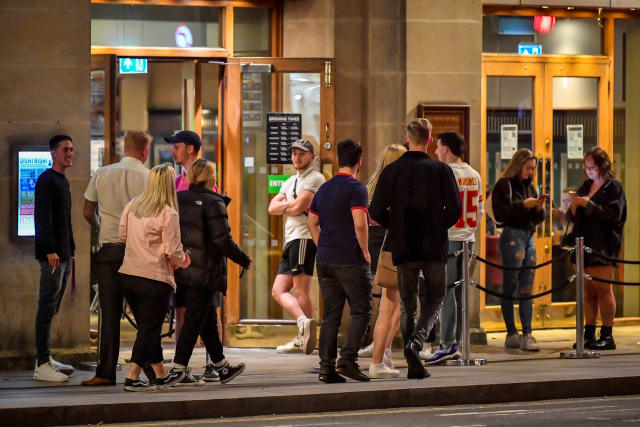 Pubs, bars and restaurants across Wales will face further restrictions to reduce the spread of coronavirus in the lead up to Christmas, First Minister Mark Drakeford has announced.

The new measures will be finalised over the weekend and announced on Monday, along with a package of financial support for the hospitality sector.

Cinemas, bowling alleys and other indoor entertainment venues will also close as part of the restrictions.

The First Minister told a Welsh Government press conference on Friday that the measures were needed as cases were rising and “headroom” was required before the Christmas period.

He said there had been a fall in coronavirus infections following the 17-day firebreak lockdown in Wales but figures had started to rise again, with the ground gained now “being eroded”.

Pubs, bars and restaurants have been open in Wales since the firebreak ended on November 9, with a 10pm curfew on alcohol sales.

“The new arrangements will apply to the whole of Wales,” Mr Drakeford said.

“That is necessary because we need a further national effort to bring down the rates in those parts of the country where they are high and to protect those areas from getting any worse where we have sustained the advantages of the firebreak for longer.

“A national approach can continue to protect us all.

“None of us wants to see further restrictions in our daily lives or our economy but we are facing a virus that is both cruel and relentless, especially in its pursuit of the most vulnerable.

“It is speeding up as we move further into winter and it thrives in all those places where come into close contact with one another.

“By adding to the actions that we are taking now, we can prepare responsibly for Christmas.”

Mr Drakeford said that the 17-day firebreak lockdown had brought down Covid-19 infection rates but there has since been a steady rise, especially among the under-25s.

On Thursday, 16 of 22 local authorities in Wales recorded rises in their seven-day rolling case rate.

Mr Drakeford said that during the firebreak, and in the weeks immediately after it, the reproduction rate or R number fell below one.

But the latest calculations suggest this now could be as high as 1.4, giving further evidence that coronavirus is circulating “widely and quickly”.

“The ground we gained during the firebreak period is being eroded as the virus thrives on normal human behaviour,” Mr Drakeford warned.

He insisted that Wales “benefited hugely” from the firebreak but said coronavirus had come back “faster and further than we had anticipated”.

Mr Drakeford told the press conference that he could not rule out such restrictions being used again in Wales in the future.

“The rapidity with which the pattern changes, the speed at which this virus can move means that it just isn’t sensible to rule out any response that we may need to make later on and into next year,” he said.

Hospitals in Wales are now under “sustained pressure”, with more than 1,700 people with Covid-19 being treated.

The Welsh Government is not intending to allow for schools to close on December 11 to ensure pupils and teachers will not have to self-isolate on Christmas Day, he confirmed.

Mr Drakeford said the Government would do “everything” it could along with unions, headteacher and local education authorities to keep schools working until Christmas.

“It is more important for our children not to miss out further on the education that is planned for them for the whole of the rest of this term and that’s what we will be working to achieve,” he said.

Paul Davies, leader of the Welsh Conservatives, called for more details to be provided for businesses.

“This is going to be a real blow for countless hospitality businesses up and down the country, businesses that have suffered greatly over the last eight months,” Mr Davies said.

“We now need to know the details from the Welsh Government because this will create an even more anxious and worrying time for businesses struggling to keep afloat.”

There were a further 1,105 cases of coronavirus recorded in Wales on Friday, bringing the total number of confirmed cases to 77,091.

Public Health Wales reported another 21 deaths, taking the total in Wales since the start of the pandemic to 2,494.