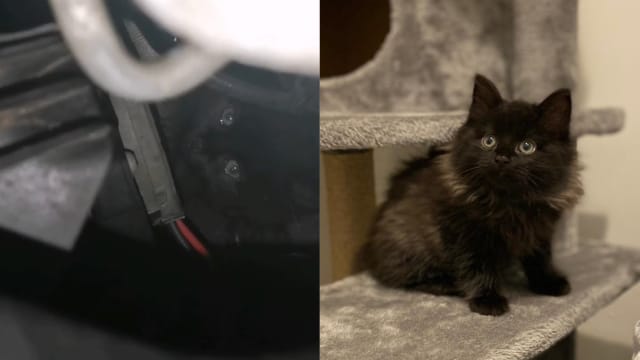 A kitten has been given a "clean bill of health" after being rescued from inside a car engine in Ballymena, Northern Ireland.

The newly formed Ballymena branch of charity Cats Protection was called after meowing was heard under a car bonnet, which turned out to be a black kitten inside the engine.

Volunteers attempted to coax him out with treats and cat calls, before reaching in and pulling him to safety.

"He was stressed and dirty with engine grime, but after a clean, a cosy heat pad and some paediatric weaning food he was purring away," branch coordinator Colin said.

"We took him to the vets the next morning and he got a clean bill of health."

The branch was also contacted to rescue a calico kitten named Cotton, who became trapped under a raised oil tank on an industrial site.

An employee at the site who had been feeding Cotton and her mother found her and called Cats Protection to bring her to safety.

She was brought in for veterinary treatment and is "back to full health".

Both Pancho and Cotton were vaccinated, microchipped and neutered before settling in with new families, where they have been renamed.

Cotton has been named Tipsy by her owners, while Pancho now goes by Kevin.