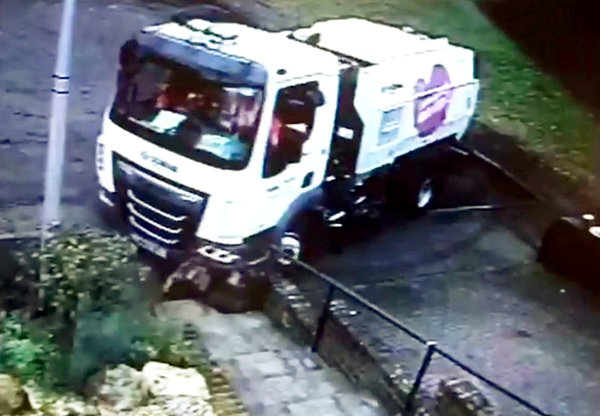 A stunned homeowner whose front wall was smashed discovered the culprits were council cleaners - who then drove off without telling her.

Debs Esccott had spotted the council cleaning vehicle outside her house in Cliffe Woods, Kent, and initially thought the workers were doing a good job at sweeping leaves from a nearby car park.

But when she returned from a trip to the shops, she found the wall outside her home had been smashed to pieces.

After reviewing her home security CCTV, she realised the same cleaners had collided with the wall during a three-point turn - but failed to tell her.

The road sweepers, having wrecked part of the wall, are seen on film haphazardly rearranging the bricks, sweeping away the mess, then driving off without any attempt to alert the homeowner.

It was only by watching her CCTV footage that Esccott was able to track down the culprits.

Her security system captured the Medway Norse van struggling to do a three-point turn before smashing into her wall.

Esccott, a retired retail worker, 57, said: "It's totally disgusting but it's the driver as well – he cannot drive.

"I came off my drive and I saw the truck coming into the close and thought 'they're doing a good job.'

"I popped out to the shops and when I got back, I found my brick wall was a pile of rubble.

"They just thought they'd pick it up and trot off. I just can't believe that they didn't put a note through the door or anything."

Esccott described the worker's driving as "diabolical" and said there was no need for him to mount the pavement.

She added: "It's totally ridiculous, I wouldn't have got in the cab with him.

"He reversed up onto the green and just before, a lady walked around. I thought 'oh my God he could have killed her.'

"The guys sweeping the road did a good job but the driver was absolutely diabolical.

"There was no need for him to mount the pavement like that.

"There were no other cars around and the close is massive. He had all the room in the world."

The next day, Medway Norse sent a bricklayer to repair the damage to the damaged wall.

The gesture came came after Esccott's video circulated on social media, capturing the attention of management staff who said they were 'appalled' by the episode.

Esccott said: "The following morning the waste manager came out after he saw the video on social media.

"He was appalled by it to tell the truth and he sent the brickie out the following morning. He bricked it all back up with no fuss whatsoever.

"I'm not complaining but that driver was absolutely shocking."

Have your say: Are England's new coronavirus tiers fair?

Repairman stole £57,000 in benefits while lying to wife about being unemployed