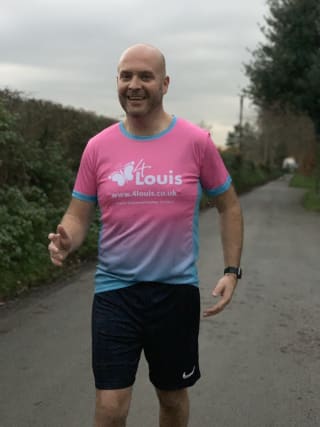 A father whose son was stillborn will run 60km in 24 hours this weekend for the 60,000 babies born prematurely in the UK every year.

Alastair Demick, 42, from Knutsford, Cheshire, will take on the challenge one year on from the death of his son Andrew.

He will run one 2.5km leg every hour from 9am on Saturday, and will be joined both virtually and physically by at least one other person on each leg of the journey.

“Twenty-four hours not sleeping and running 60km is by no means easy, especially when I’m not an ultrarunner or anything like that,” Mr Demick told the PA news agency.

“When you look at what people are going through, losing a child, they would happily run 60km with no sleep as opposed to what they have to go through.”

Mr Demick has so far raised more than £6,500 having set an initial target of £600, with the money going to 4Louis, a UK charity that “works across the country to support anyone affected by miscarriage, stillbirth and the death of a baby or child.”

They do so by providing affected families with memory boxes, photography equipment, burial beds and more.

Bliss, a UK charity, estimates that around 60,000 babies are born prematurely in the UK every year.

“We were absolutely devastated that he’d died,” said Mr Demick of his son.

“We were very fortunate that we were looked after at Macclesfield District General Hospital where the midwives are beyond amazing.

“As part of that we were given this box… and it gave us the opportunity to have everything we needed that we didn’t know we needed, in terms of memories of our son.

“It’s just an incredibly thoughtful kit that has been put together by people who have been there. Without charities like 4Louis a lot of these things can’t happen.”

Mr Demick will be joined by friends across the world on his run, and will run the first leg with his wife and two sons, eight and six.

In particular he is looking forward to his dad joining him on a video call at midnight from Northern Ireland, where he will walk as his son completes another leg of the challenge.

“I wanted to raise awareness,” he said. “It’s really sad, but it’s ok to talk to people about sad things.”

To read more and donate, go to https://www.justgiving.com/fundraising/aldemick.