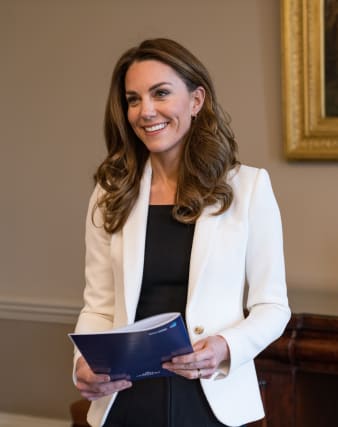 The Duchess of Cambridge has delivered a passionate speech calling for the early years development of children to be viewed on the same level as “other great social challenges and opportunities of our time”.

Kate said the “social cost” of late intervention had been estimated at more than £17 billion a year, for young people who needed support for problems which might have been prevented when they were children.

The duchess was “humbled” by the more than half-a-million people who had taken part in her “five big questions on the under-fives” poll, which reported that only one in four people recognised the key importance of the first five years of a child’s life.

In a keynote speech during an online Royal Foundation forum to discuss the poll and other research, Kate also urged society to tackle the problems highlighted by the work and “elevate” the importance of early years to build a more “nurturing society”.

The duchess said she had found people with issues like addiction or poor mental health often had a difficult childhood, but that “positive protective factors” during the early years of a child’s life played a “crucial role” in shaping the future.

Kate added: “And I care hugely about this. Because the science shows that the early years are more pivotal for future health and happiness, than any other period in our lifetime.

“Because as many as 40% of our children will arrive at school with below the expected levels of development; and because the social cost of late intervention has been estimated to be over 17 billion pounds a year.

Kate has been the driving force behind a new early years report which features a number of studies, conducted by Ipsos MORI, including the Royal Foundation’s “five big questions on the under-fives” poll which attracted more than half-a-million participants – the largest-ever response to a survey of its kind.

The research reported that 98% believe that nurture is essential to lifelong outcomes, but that only 24% think pregnancy to age five is the most pivotal period for health and happiness in adulthood.

Although 90% see parental mental health and wellbeing as critical to a child’s development, only 10% of parents took time to look after themselves when they prepared for the arrival of their baby, the research states.

The study – which has produced five key insights – also showed that the Covid-19 pandemic has dramatically increased parental loneliness, with 38% experiencing this before the crisis, and 63% – almost two-thirds – after the first lockdown, a jump of 25%.

Kate said the report’s findings raised a number of questions, from how to address parental loneliness to how to raise awareness about the importance of early years after the study found only a minority of people understood its relevance.

She added: “We must do all we can to tackle these issues and to elevate the importance of the early years, so that together we can build a more nurturing society.

“Because I believe the early years should be on par with the other great social challenges and opportunities of our time.”

The research has been hailed a “milestone moment” for Kate, and will be used to shape her future focus on early years development.