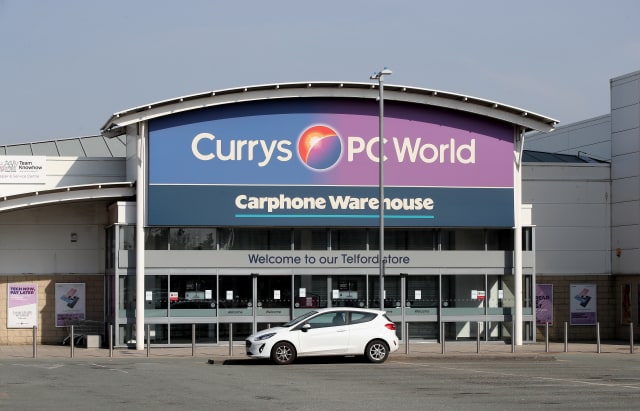 Currys PC World has apologised to customers after some saw hundreds of pounds accidentally wiped off their gift cards in a Black Friday surge.

The company saw a surge in demand which resulted in the website being completely unavailable for a period of time on Friday evening.

Customers reported seeing hundreds of pounds “wiped” from gift cards as they went to purchase items.

Richard Langton, who had been hoping to purchase a laptop in the sales, said he lost £450 after the money was taken from his gift card, but the order not fully processed.

He told the PA news agency: “When I submitted the order a message came up saying ‘Couldn’t process the transaction, try again later’. So I kept trying and eventually, the site went down for maintenance.

“When it was finally up and running again I did the same procedure and when I entered my voucher code it said I only had £5 to use, meaning they took the money for the goods and now I have no order or any money. We can’t afford to lose over £450.”

He said he had purchased the non-refundable gift cards through a company benefits scheme, in order to save money.

“The sale ends tonight so if by some miracle I do get the money back on the voucher I won’t be able to afford the original price and will be stuck with a voucher and no laptop,” he said.

The company’s customer service Twitter account, @TeamKnowhowUK, apologised to customers and said: “Our gift-card provider is having issues right now due to unprecedented demand.”

It was offering to reverse the funds, but some customers said they had been told this could take several days, by which point the sale will have ended.

Another customer told PA she had seen £850 vanish from her gift card balance.

She said she phoned Currys and was originally told the money would be refunded by 2pm, adding: “Hours and many messages later I finally called back just before 6 to say they can see my order has now been cancelled and will process a refund which will take 3-5 workings days.”

Currys PC World said it had seen home delivery orders rise by 59% and click and collect soar by 233%, with six orders taking place every second.

Apple AirPods and the Nintendo Switch were the most popular items, it said.