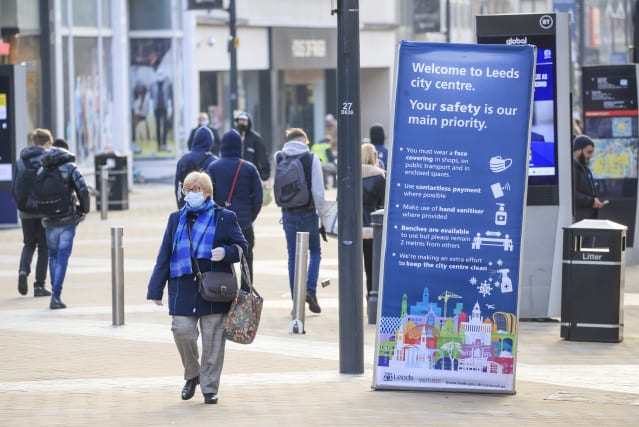 Ministers have raised the prospect that some coronavirus restrictions in England could be eased before Christmas as they seek to head off a growing Tory revolt.

Many Conservative MPs reacted with fury after it emerged that 99% of the country is to be placed in the top two tiers of restrictions when the lockdown lifts next week.

There was bafflement that areas with low infection rates are facing tougher controls – including a ban on social mixing indoors – than before they went into lockdown last month.

With a crucial Commons vote looming, Communities Secretary Robert Jenrick insisted there is “every reason” to expect some areas could be moved into a lower tier when the controls come up for their first 14-day review on December 16.

“At that point we – advised by the experts – will look at each local authority area and see whether there is potential to move down the tiers,” he told Sky News.

“There were a number of places which were quite finely balanced judgments where they were on the cusp of different tiers. Those are the places that are more likely to be in that position.”

However, Professor John Edmunds, a member of the Government’s Scientific Advisory Group for Emergencies (Sage) warned there would be limited scope for easing controls so quickly.

“I think that is quite an early time to be able to see what the effect has been. I think we will still be seeing the effect of the lockdown at that point in time,” he told BBC Radio 4’s Today programme.

“I can’t imagine there will be huge changes at that point, just simply because I don’t think we will have accumulated much data by then.”

He said it is important to keep rates down – even in areas of low infection – and that ministers have had to strengthen controls as the previous tiered restrictions had failed to curb the spread of the disease.

“The Tier 1 and Tier 2 really weren’t slowing the epidemic very much at all. We would have just seen those places pick up again quite rapidly,” said Prof Edmunds.

With a five-day easing of restrictions coming across the UK over Christmas, Mr Jenrick acknowledged that they could not afford to move too quickly.

“Our overall approach is trying to ensure the tiers hold the line and that places are in a process of de-escalation,” he said.

“What we don’t want to do is ease up too quickly and then find that, in January, we are having to put tiers back in place again.”

Former cabinet minister Damian Green, Tory MP for Ashford in Kent, which is going into Tier 3, said there is a lot of anger on the Conservative benches.

He said his constituents do not understand why, after successfully driving down infection rates in their area, they now face the toughest controls.

“People here feel obviously everyone has been behaving properly and observing the guidelines and all of that,” he said.

“The reward is we went into the lockdown in Tier 1, we come out in Tier 3, which has just made people think ‘Well, what was the point of this lockdown?’”