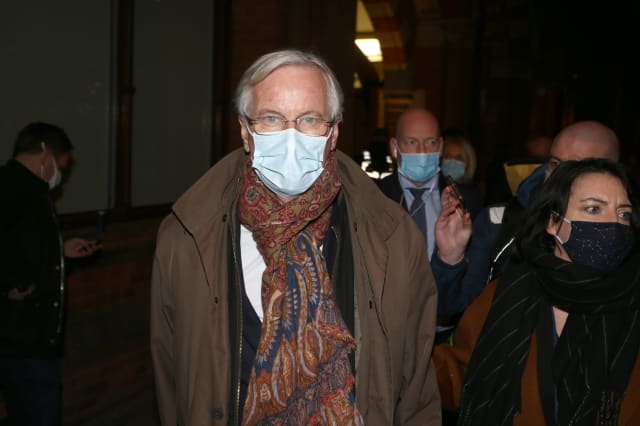 Time is tight to secure a free trade deal between the two sides, with the transition period set to end in just over a month.

But Mr Barnier, arriving in London on Friday evening, told reporters that he would continue to work with "patience and determination" to reach an agreement.

Face-to-face negotiations were paused last week after one of the EU team tested positive for coronavirus.

Mr Barnier tweeted earlier on Friday that the "same significant divergences persist" between the UK and EU.

Talks have been deadlocked for months over the issues of fishing rights, the governance of any deal, and the "level playing field" conditions aimed at preventing unfair competition by cutting standards or increasing state subsidies.

Writing on Twitter on Friday, he said that while it was "late" to reach a deal an agreement was still "possible".

"Some people are asking me why we are still talking. My answer is that it's my job to do my utmost to see if the conditions for a deal exist. It is late, but a deal is still possible, and I will continue to talk until it's clear that it isn't.

"But for a deal to be possible it must fully respect UK sovereignty. That is not just a word – it has practical consequences. That includes: controlling our borders; deciding ourselves on a robust and principled subsidy control system; and controlling our fishing waters.

"We look to reach an agreement on this basis, allowing the new beginning to our relationship with the EU which, for our part, we have always wanted. We will continue to work hard to get it – because an agreement on any other basis is not possible."

Irish broadcaster RTE reported that Mr Barnier told Britain some weeks ago that the EU could accept 15-18% cut in its share of fishing rights in UK waters, but British officials were said to have immediately rejected the offer.

Prior to Mr Barnier's announcement there had been uncertainty about when the face-to-face talks would resume amid reports that he would only head to London if there was a significant shift in the UK's position.

The talks came as Downing Street said Boris Johnson "underlined his commitment" to reaching a Brexit deal that "respects the sovereignty" of the UK in a call with Irish Taoiseach Micheal Martin.

A Number 10 spokeswoman said the men spoke on Friday evening and discussed the progress in the UK-EU negotiations.

"The Prime Minister underlined his commitment to reaching a deal that respects the sovereignty of the UK. The leaders also reaffirmed the need to prioritise the Good Friday Agreement and avoid a hard border on the island of Ireland."