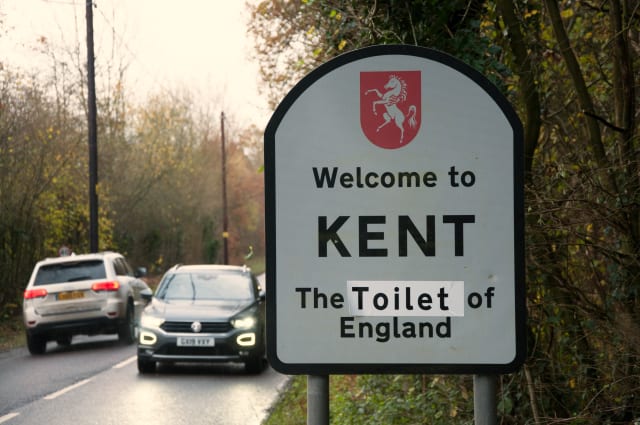 Drivers in the South East received an unexpected message on Friday morning: "Welcome to Kent The Toilet of England".

Signs across the county were changed overnight by a group of activists opposed to Brexit.

Where before motorists would be politely informed they were entering the Garden of England – as Kent is known – the new message was a bit more political.

The stunt aimed to highlight fears of huge lorry queues along the county's motorways, with suggestions that portable toilets will have to be installed on roadsides for use by delayed drivers.

A member of the activist team, known collectively as EU Flag Mafia, told the PA news agency: "All of these signs have been changed overnight.

"It's a bit of fun but there's obviously a very important message to this.

"Kent will be a traffic jam of lorries come January for certain and that will be the case for a very extended period."

The cloak-and-dagger operation – which activists stressed was compliant with Covid guidelines – covered around 30 road signs stretching from Dartford near London to the border with East Sussex.

"The reality and the consequences of Brexit are only just starting," said the spokesman.

"The destructive nature of Brexit is about to be unleashed on January 1.

"The huge queues on the roads this week is just a foretaste of what's to come.

"The people of Kent, like the rest of the UK, have been conned into voting for an impossible dream of an oven-ready Brexit."

Cabinet Office Minister Michael Gove has previously warned that queues of up to 7,000 trucks could form in Kent unless businesses do more to prepare.

Friday's stunt came after thousands of people called for a huge new Brexit "lorry park" near Ashford to be named after Nigel Farage.

A tongue-in-cheek petition campaigned for the Brexit Party leader to be recognised for his contribution to the UK leaving the EU.

Up to 1,700 lorries will be able to park at the new facility, which is under construction next to the M20.

Ashford Borough Council said the Border Control Post will operate 24 hours a day, seven days a week, 365 days a year and currently estimates it will carry out more than 124,000 checks per year.