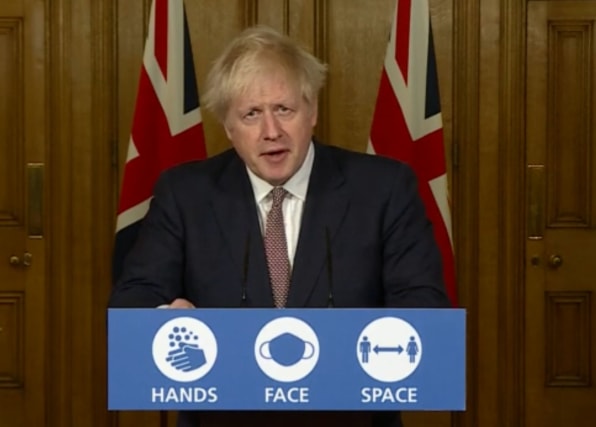 Tough coronavirus restrictions will continue to apply to more than 55 million people in England even after the national lockdown lifts on December 2.

Only the Isle of Wight, Cornwall and the Isles of Scilly – accounting for little over 1% of England’s population – face the lightest Tier 1 restrictions.

Large swathes of the Midlands, North East and North West are in the most restrictive Tier 3, but the majority of people – including London – will be in Tier 2.

At a Downing Street press conference, Prime Minister Boris Johnson said: “I’m sorry to confirm that from Wednesday most of England will be in the top two tiers, with the toughest measures.

“And I know that this will bring a great deal of heartache and frustration, especially for our vital hospitality sector.”

In Tier 1, the rule of six applies indoors and outdoors, people are urged to work from home if they can and pubs are limited to table service.

In Tier 2, restrictions include a ban on households mixing indoors, while pubs and restaurants will only be able to sell alcohol with a “substantial meal”.

Tier 3 measures mean a ban on households mixing, except in limited circumstances such as in parks.

Bars and restaurants will be limited to takeaway or delivery services and people will be advised to avoid travelling outside their area.

In all areas, shops and schools will remain open.

The Prime Minister acknowledged that pubs, restaurants and hotels – “the soul of our communities” – were bearing a “disproportionate share” of the burden in controlling the virus in order to ensure it was safe for children to go to class.

“If we’re going to keep schools open – as we must – then our options in bearing down on the disease are necessarily limited,” Mr Johnson said.

But he said that advances in vaccine and testing technologies could offer hope once the country gets through a “hard winter”.

Areas placed in Tier 3 from December 2 include:

– In the North West: Greater Manchester, Lancashire, Blackpool and Blackburn with Darwen.

– In the West Midlands: Birmingham and Black Country, Staffordshire and Stoke-on-Trent, Warwickshire, Coventry and Solihull.

– In the East Midlands: Derby and Derbyshire, Nottingham and Nottinghamshire, Leicester and Leicestershire and Lincolnshire.

– In the South East: Slough, Kent and Medway.

– In the South West: Bristol, South Gloucestershire and North Somerset.

The tier allocations will be reviewed on December 16, with weekly revisions thereafter.

Case rates are currently rising in only eight of the 119 areas to go into Tier 3.

Seven of the eight are in south-east England: Dover, Folkestone & Hythe, Gravesham, Maidstone, Medway, Tonbridge & Malling, and Tunbridge Wells. The other is Hyndburn in north-west England.

MPs will vote on the new system on December 1, the day before the tiers come into force, and Mr Johnson faces a revolt on the Tory benches over the measures.

The Government has promised to publish an impact assessment of the measures before MPs vote on them following protests that economic harm and the knock-on health impacts of restrictions are not being properly considered.

“But is it necessary and proportionate to the threat from this disease?”

Sir Graham Brady, chairman of the powerful Tory backbench 1922 Committee and a Greater Manchester MP, said: “This is a really heavy-handed approach.”

Former minister Tobias Ellwood said he will not support the Government in next week’s vote after his Bournemouth constituents were placed in Tier 2.

Conservative West Midlands Mayor Andy Street said it is “very disappointing” that the area has been placed in Tier 3, and he demanded more support for businesses forced to close.

The Confederation of British Industry’s UK policy director Matthew Fell said: “Some parts of the economy, such as retail, can begin to reopen and look towards a recovery. It gives our high streets a chance to rescue some of the vital festive trading period.

“But for other businesses, the ongoing restrictions in Tiers 2 and 3 will leave their survival hanging by a thread. Hospitality will remain frozen.”

– The latest figures show a further 498 people had died within 28 days of testing positive for Covid-19 as of Thursday, and there were another 17,555 lab-confirmed cases of coronavirus in the UK.

– A total of 152,660 people tested positive for Covid-19 in England at least once in the week to November 18, according to the latest Test and Trace figures, down 9% on the previous week’s total of 168,250 and the first week-on-week fall since August.

– Just 60.3% of close contacts of people who tested positive for Covid-19 in England were reached through the system in the week ending November 18.

– Covid-19 infections across England are levelling off but there are still wide regional variations, according to the Office for National Statistics, which found around one in 85 people were infected with coronavirus in the week November 15 to 21.

– Guidance in Scotland urges people to have no more than eight people aged over 12 in any Christmas “bubble” they form with family and friends during the UK-wide relaxation of rules between December 23 and 27.