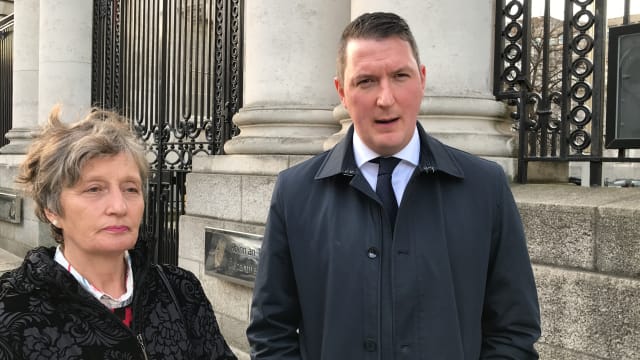 John Finucane told an Irish parliamentary committee on Thursday that Mr Martin had engaged with Mr Johnson on the matter this week ahead of the court deadline of November 30 for the British Government to respond to a UK Supreme Court ruling made last year.

The Belfast MP and Pat Finucane’s widow, Geraldine Finucane, met Mr Martin at Government Buildings in Dublin on Monday for the first time.

Mr Finucane said Mr Martin was “unequivocal and unambiguous” in giving the family not only his personal support but also the support of the Irish Government.

“He didn’t need us to explain to him the significance and importance and the need for an inquiry into the murder of my father, and he committed to and I understand has already engaged with Boris Johnson on this issue,” Mr Finucane told the committee.

Mr Martin told the Irish parliament on Tuesday that the British Government “should and must” hold a public inquiry into the killing.

Pat Finucane, 39, was shot by loyalist paramilitaries in front of his family in 1989 amid claims of collusion with state security forces.

A motion to establish a full independent, public judicial inquiry into the killing was agreed at the Implementation of the Good Friday committee on Thursday.

Mr Finucane told the committee that in February 1989 his family had “sat like many other families” enjoying their Sunday dinner around the kitchen table when “two gunmen burst in and shot my father 14 times and shot my mother once in front of us all”.

The Sinn Fein MP said one of the most significant moments in the family’s campaign to seek justice was when then British prime minister David Cameron apologised for the British state’s collusion in the killing.

“In October 2011 I sat in 10 Downing Street along with my mother and the rest of my family as we listened to the then-prime minister David Cameron explain to us and apologise for collusion that took place between the British state and killers that came into our house and killed my father,” he said.

“That for me was one of the most significant points in our 31-year campaign.”

Mr Finucane said a fully independent public judicial inquiry was the “only mechanism” that could “fully grasp all of the issues” that led to his father’s murder.

“There is only one option left for the British Government to do and that is to have an inquiry, to have the inquiry that they promised, the promise they made to my family but also to the Irish Government, the inquiry in which they have resisted, and put all of their time and their efforts and all of their considerable resources into resisting for over 30 years,” he said.

He added: “The British Government needs to heed and read the room with where this issue is going.

“It’s not going away.

“We are no longer interested in who pulled the trigger – we want to know who pulled the strings and it is now time the British Government live up to the promises they previously made.”

TDs and senators heard that dealing with legacy issues would be difficult.

“Nobody underestimates how difficult it will but believe me my family are ready to deal with it.

“Other families who have suffered loss are ready for it,” he said.

“I think at this time it’s incumbent on the British Government to heed the words of my family.”

Last week it emerged that four of Northern Ireland’s political parties had united to call for a public inquiry into the murder of Mr Finucane.

They wrote a joint letter to Mr Lewis to emphasise that establishing the full facts around the killing was a matter of “the utmost public interest” and that “only a public inquiry can now assist the Finucane family to get the truth about the scope and extent of state collusion into Pat’s killing”.