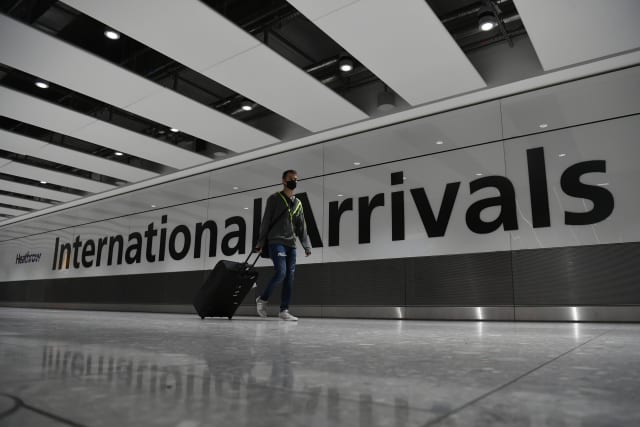 Air travel to and from the UK fell more than 95% in the first months of lockdown when compared to last year, according to latest figures.

International migration and mobility have changed significantly since the start of the coronavirus crisis, the Office for National Statistics (ONS) found.

Analysis of statistics from the Civil Aviation Authority (CAA) found that the volume of air passengers arriving and leaving the UK was significantly lower in March when compared with the same month last year.

This dropped further in April to June, with falls of more than 95% for UK travel to and from most world regions when compared to the same months in 2019.

There was an uplift in arrivals and departures between July and September, according to the ONS, when international travel restrictions began to ease and corridors were introduced.

But the volume of air travel was still significantly lower than before restrictions were applied in the UK in March.

Meanwhile, data from the Home Office analysed by the statistics agency found there were around 1.7 million passenger arrivals to the UK by air in the month of October.

This is higher than the average for April to June, when there were fewer than 200,000 arrivals per month – but around 82% lower when compared to 9.8 million arrivals in October last year.

Due to the national restrictions imposed on November 5, with people only permitted to travel abroad for certain reasons, the ONS said it expects to see further changes in the pattern of international travel for this period.

The statistics agency also found that between April and June this year, the overall number of visa applications and grants fell significantly due to application centres being closed at the end of March.

While they have since reopened, the number of long-term work and study visas issued between April and June fell by 85% and 99%, compared to the same months last year.

Centres have since gradually reopened and in the year ending September 2020, there were 93,000 and 161,000 work and study visas granted respectively.

Compared with the previous year, this was a decrease of around 100,000 visas issued, according to the ONS.