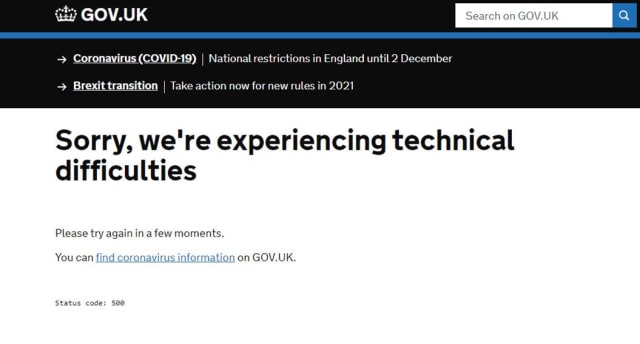 The Government’s approach to communications has again come in for heavy criticism after a postcode checker used to announce new regional lockdown restrictions crashed moments after being launched.

The failure of the tool, launched on the Government’s website, left many unable to immediately find out which of the three tiers their area had been placed in.

Labour deputy leader Angela Rayner was among the critics, tweeting: “Postcode checker crashes as the government announces which areas are in which Tiers. Sums up the whole shambolic handling of the Tiers system right from the start.”

Commons Speaker Sir Lindsay Hoyle also admonished the Government for posting the information online before it had been presented to MPs in the Commons.

Sir Lindsay replied: “This House should be informed first. We keep telling the Government that is the way that good government should treat and respect this chamber. It is not acceptable to put it online.

“The only good thing about the Government is it’s crashed so it’s not helpful, so might be that we do get the statement first.”

Others saw the lighter side, with one Twitter user, Richard Knightwell joking; “Apparently my area is in Tier 504 Gateway Time-out, I’m confused does that mean I can go to the pub or what.”

The Government prompted more confusion after a breakdown of the restrictions published alongside Health Secretary Matt Hancock’s written statement contained question marks throughout.

Liberal Democrats health spokesperson Munira Wilson was among many to point out the error, tweeting: “Lots of question marks dotted around the written statement from @MattHancock today on allocations of tiers – has the wrong draft been submitted by mistake?”