Migrant deaths trial accused: ‘I should have minded my own business’ 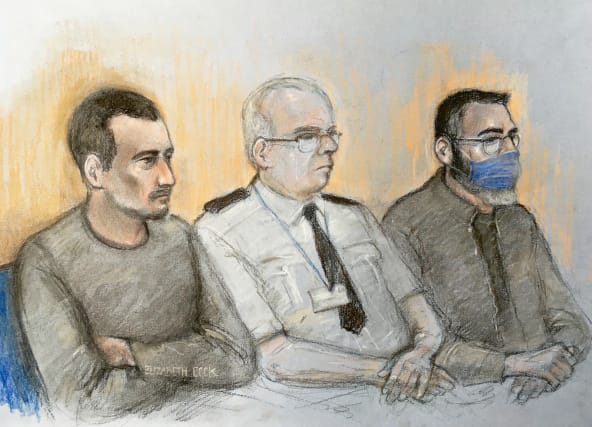 A van driver has described how he was duped into people smuggling five days before 39 migrants were found dead, telling jurors: “I should have minded my own business.”

Valentin Calota, 38, claimed he unwittingly took a load of people from Essex to London on October 18 last year.

Jurors have heard the migrants had been shipped from Zeebrugge to Purfleet in a trailer then transported to Orsett, where they were picked up in a van.

The defendant said he was wearing earphones and had the radio on for the hour-long trip to London and had no idea they were there.

The Romanian haulier told jurors he was “shocked” to be arrested as part of the investigation into the deaths of 39 Vietnamese people who suffocated on the journey to Essex days later on October 23 last year.

Giving evidence at the Old Bailey, Calota said he was “misled” by a Romanian acquaintance, Gheorghe Nica, who had offered to pay him £700 to transport cigarettes.

Asked how he felt now, Calota said: “I’m angry with him. But more than that I’m angry with myself because the mistake that brought me here was mine.

“I should not have accepted involvement in any smuggling of cigarettes. I should have minded my own business and I’m very sorry and apologetic.”

The defendant said had known alleged key organiser Nica since 2017 and was aware he was involved in smuggling cigarettes.

Calota told jurors: “He said that he had a job for me for a few hours.

“He said that he was expecting a shipment of cigarettes or alcohol. He did not know for sure which.”

Calota said he met Nica in a car park in Tilbury in Essex where he picked up a van and drove it to a place in Orsett he knew as the “garages”.

Once there, Nica gave him further instructions, the defendant said: “He told me you don’t need to do anything Valy. I pick up the cigarettes, you go where I tell you.

“He told me where to stop. He said Valy you don’t come out, stay in the car. Look ahead. Make sure nobody comes.

“Nica went to the back of the van with other people, I assume. I could hear noises. I could hear people talking. I assumed something was being loaded.

“I thought that the cigarettes he had been telling me about were being loaded. As you can imagine I was nervous, I was looking ahead. My heart was beating very fast.”

Calota said he set off on the hour-long journey to London, wearing his Bluetooth headset and listening to the radio.

Abdul Iqbal QC, defending, asked: “As you were driving along did you think there could be people in the back of the van?”

The defendant replied: “Not for one moment.”

Once he got to London, Nica again told him to park but “not get out of the van, look ahead”, jurors heard.

Calota said: “I saw a number of people carrying holdalls on their shoulders. The holdalls looked square as if they are cartons of cigarettes.

“I thought that those cigarettes were being unloaded.”

Mr Iqbal said: “We have heard the evidence in this case. Do you dispute the evidence of Mr Nica when he says there were actually human beings in the back of the van?”

Calota replied: “I don’t dispute that.”

The defendant said Nica paid him the agreed £700 plus £150 in expenses before he drove home to Birmingham in his car.

When he was arrested as part of the investigation into the migrants’ deaths, Calota said he thought it was “a mistake”.

Asked why he made no comment in his police interview, he said: “Firstly as a snitch to police I would not have had a pleasant time in prison.

“I was also afraid for my family, you see he (Nica) is also Romanian. I did not know what people he knew, what could or not have happened to my family.”

Nica, 43, of Basildon, Essex, and Eamonn Harrison, 23, of County Down, have denied 39 counts of manslaughter.

Calota, Harrison and Christopher Kennedy, 24, of County Armagh, have denied being involved in a people smuggling plot, which Nica has admitted.