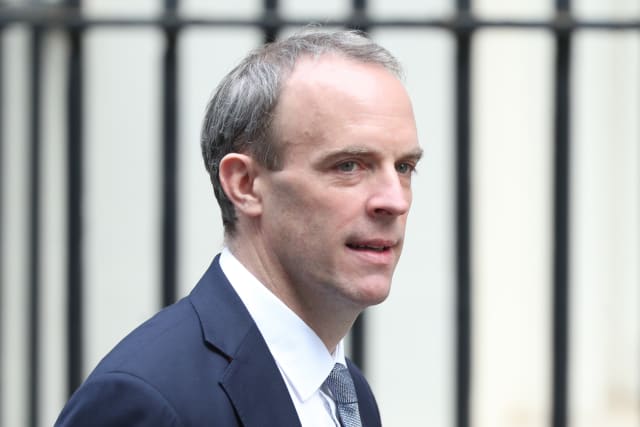 Dominic Raab has denied the Government is "salami slicing" all parts of the UK's overseas aid spending as he outlined the priorities for the slashed budget.

The Foreign Secretary said the long-term strategic aims of the country's international work will be based on "our values and grounded in the British national interests".

Tackling climate change, Covid-19, girls' education, conflict resolution and expanding in-house management of aid delivery "in order to increase the impact that our policy interventions have on the ground" were listed by Mr Raab as the top five areas.

Conservative MPs continued to voice their opposition to the decision to cut overseas aid from 0.7% to 0.5% of gross national income (GNI) in 2021, with some noting their belief that Mr Raab was not behind the policy.

The 0.7% target is written into law and Boris Johnson's 2019 election manifesto promised to keep it.

The UK's annual aid spend from 2021 is expected to be £10 billion once the temporary cut is imposed – compared to the previous figure of £15 billion.

Foreign Office minister Baroness Sugg quit in protest against the plan but Chancellor Rishi Sunak used a round of broadcast interviews to claim Britain is not turning its back on the world's poorest people.

He admitted it was a "difficult decision" to slash the budget but said the UK is in the midst of an "economic emergency".

Making a statement to the Commons, Mr Raab also expressed "regret" at the decision but said it is necessary as "every penny of public spending will rightly come under intense scrutiny".

Conservative former international secretary Andrew Mitchell said his party "do not need to break" their 0.7% spending promise, adding it will "drive a horse and cart" through many of the Government's aid plans.

He added: "It will withdraw access to family planning and contraception for more than seven million women, with all the misery that that will entail, 100,000 children will die from preventable diseases, two million – mainly children – will suffer much more steeply as a result of these changes from malnutrition and starvation."

Mr Mitchell welcomed commitments to girls' education but noted: "On existing plans, probably a million girls will not be able to go to school. I hope he will bear in mind these reductions make little difference to us in the United Kingdom but they make a massive difference to them."

Mr Raab, in his reply, said: "With respect I don't think it's possible to say with the precision he did about the implications because we're not going to take a salami-slicing approach of just saying we'll cut a third from all areas of ODA (official development assistance).

"We're going to take a strategic approach, we'll safeguard those areas that we regard as an absolute priority – including many of the things he mentioned, particularly on international public health alongside Covid, climate change and girls' education."

Conservative MP and Father of the House Sir Peter Bottomley said it would be "illuminating" to see Mr Raab's messages to the Treasury and the Prime Minister arguing against the cut, noting: "We know it's not his idea."

Theo Clarke, Conservative MP for Stafford, added she is "deeply concerned" by the aid cuts.

The overseas aid policy was one of a number of measures outlined in the Spending Review intended to help cope with the economy contracting by an expected 11.3% this year.

Mr Sunak also announced what amounted to a pay freeze for an estimated 1.3 million public sector workers and sought to defend the policy on Thursday morning.

The Chancellor told MPs on Wednesday the economy is not scheduled to recover to pre-crisis levels until the end of 2022.

Conservative MP Anthony Mangnall (Totnes) added: "To say that I am disappointed in this decision is an understatement. I am horrified that we have decided to break a manifesto commitment and I am horrified at the message that this sends to the many women who have suffered such horrendous acts of sexual violence and conflict, especially given the fact that yesterday was the UN day for an international elimination for the violence against women."

Danny Sriskandarajah, chief executive of Oxfam GB, warned: "By choosing to buy military hardware rather than pay for clean water or medicines, the Government will diminish the UK's standing in the world.

"MPs of all parties who believe in a truly global Britain or who have spoken out against breaking the UK's promise to the world's poorest people now have the chance to vote down this legislation and make the Government think again."