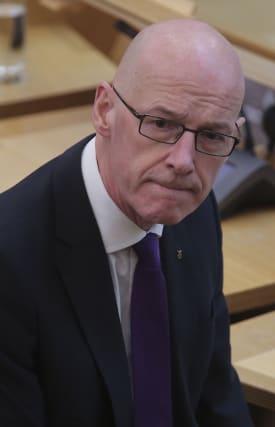 The Scottish Government could face a vote of no-confidence if ministers continue to refuse to hand over legal advice about its unlawful investigation of Alex Salmond, following a second defeat in Parliament.

Holyrood has again voted to demand the government immediately release the legal advice it received during the judicial review about the botched investigation of claims of sexual harassment by the former first minister.

Deputy First Minister John Swinney was accused of “cynically running down the clock” after failing to provide the information to the inquiry into the government’s handling of the investigation.

Opposition parties united to defeat the government for the second time in three weeks on the subject of the legal advice by 65 to 55 votes on the non-binding motion.

Scottish Liberal Democrat MSP Alex Cole-Hamilton suggested that the Deputy First Minister may face another vote of no-confidence if the legal advice is not handed over to the committee.

Mr Swinney previously survived a vote of no-confidence called in August in the wake of the exam results fiasco.

Opening the debate, which called on the government to release the legal advice “without any further delay”, Scottish Tory MSP Murdo Fraser said the government must respect the will of Parliament “if they want to have any shred of credibility left”.

Mr Fraser argued that the Committee on the Scottish Government’s Handling of Harassment Complaints has been asking for the advice “for months” and the government “should not be scurrying around at the last minute, trying to make excuses as to why vital documentation should not be made available”.

He explained that the committee has set a Christmas deadline for hearing oral evidence and it would be “extremely difficult, if not impossible to meet that deadline unless the legal advice is forthcoming”.

“It is hard, therefore, to avoid the conclusion that this is a government which is cynically running down the clock on the inquiry, hoping that time will overtake us, and we will not be able to do the job that Parliament expects,” Mr Fraser added.

Mr Swinney told MSPs that “no final decision has been made by the government” about publishing the advice, but claimed there could be a “very real potential for negative consequences”.

He suggested that it could create a precedent that could “potentially undermine the ability of the government to receive legal advice”.

She said: “The Scottish Government like to think of themselves as world leaders and indeed they are – world leaders at dissembling, obstruction and secrecy.”

Ms Baillie quoted First Minister Nicola Sturgeon who, in January to Parliament, said the committee would receive whatever information it required, but said this now appeared to be a “hollow and meaningless promise”.

Ms Baillie added: “This Parliament voted by majority for the release of the legal advice. This Parliament asked the Deputy First Minister to get on with doing so and if he refuses to do so, he and his government are holding the Parliament in contempt, and it is becoming increasingly evident that he does have something to hide.”

Mr Cole-Hamilton said “the optics of this are terrible” in denying access to the legal advice, adding: “Everything about it wreaks of cover-up.”

He said: “Our patience is at an end and should the Deputy First Minister not deliver to us what we seek in short order then he may well face another motion in the coming days – one which tests the confidence of members in those responsible for blocking the will of Parliament.”