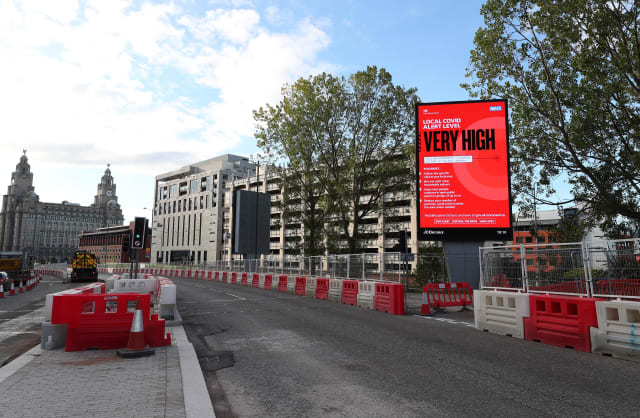 England will return to a tiered system of coronavirus restrictions next week when the national lockdown ends.

The Government will announce on Thursday which places will be in Tiers 1, 2 and 3, but it has already briefly outlined the factors which will influence its decisions.

What are the key indicators that will primarily determine the restrictions in each area?

The two other measures are the positivity rate – the number of positive cases detected as a percentage of tests taken – and pressure on the NHS, including current and projected occupancy.

But Downing Street has declined to give any further details on the indicators, nor any estimate of the thresholds.

Why are there not rigid thresholds?

The Government has said it will need to maintain flexibility to weigh the indicators against each other – such as whether hospital capacity in neighbouring areas is lower.

Another example given in the Coronavirus Winter Plan is that case detection rates would need to be weighed against whether the spread of the virus is localised to particular communities.

“Given these sensitivities, it is not possible to set rigid thresholds for these indicators, as doing so would result in poorer quality decisions,” the plan states.

What about economic factors?

These are not listed among the key criteria but Downing Street said the Government was always aware of the effect of restrictions on the economy.

The Prime Minister’s official spokesman, when asked if economic factors would be considered, said on Tuesday: “Ministers have always been cognisant of the economic impact.”

How have local leaders reacted?

Mayor of Greater Manchester Andy Burnham said it was “more likely than not” the area would be made subject to Tier 3 restrictions.

He said although infection numbers in Greater Manchester were still high, the rates were falling.

Liverpool City Region mayor Steve Rotheram said he hoped the area – which was the first to enter the highest tier last time – would not return to Tier 3 restrictions.

He said: “The progress we’ve made since we were put in Tier 3 is remarkable – we’ve gone from having two areas with infection rates of about 750 per 100k to 180 across the city region.”

Meanwhile, Lancashire’s council leaders have submitted a proposal to the Government to divide the county into two different tiers when the lockdown ends.

A request has been made for Hyndburn, Rossendale, Burnley, Pendle and Preston to go into Tier 3 restrictions while Fylde, Wyre, Lancaster, Chorley, South Ribble, Ribble Valley and West Lancashire would go into Tier 2.

And London mayor Sadiq Khan said it would be the “right and sensible decision” for the capital to be placed in Tier 2, as he warned that Tier 3 would be a “hammer blow” to businesses.